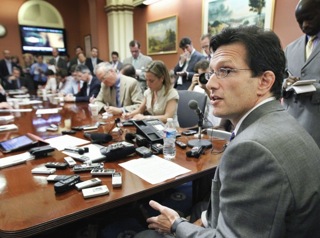 Rep. Eric Cantor is a petulant child, and President Obama is the know-it-all teacher’s pet tattling that he refused to “eat his peas.” These are the headlines greeting America this morning– headlines which, given the financial guillotine Moody’s is dangling over America’s neck, read to some as rather shallow. The shock, sincere or not, unveils a naivete towards government in the American psyche that overlooks a harsh, but inescapable, reality: The media has turned Congress into a playground. Why are we surprised only children want to work there?

The he said/she said that arose from yesterday’s heated budget meeting, with Rep. Cantor immediately running to the press to complain that the President had stormed off abruptly after lecturing him, is the catnip of pundit class hall monitors nationwide. No one who wasn’t in the room knows what happened for sure, but conflicting reports seem to agree on this much: during the budget meet, Rep. Cantor suggested a series of small votes as a short-term solution, something that had been tabled long before and would complicate the situation even further. This made President Obama launch into a diatribe about patience and maturity and Ronald Reagan and the American people, etc etc (Democrats say it was “incredible,” Republicans claim it proves the President is a “crybaby”). No one wins, but America loses– it’s a familiar story.

Perhaps it is apt that, given their leadership in covering of the current episode of Rugrats playing out in the Capitol building, it is Politico that runs a piece condemning all of Congress for being “bozos” and dives into the partisan fray by complaining Republicans won’t submit to Democratic demands. That piece’s author, Roger Simon, blames the American people for electing the the current crop of legislators and demands they do better next time. But blaming the American people for making false choices among various breeds of political show dogs ignores the fact that only a very narrow personality type would be attracted to the national stage the media provides our legislature. Congress is a place for pure-bred, poofy-haired, yappy Malteses, not for your neighbor’s smart but reclusive German Shepard mix. Curbed egos need not apply.

In many ways, Congress is a self-selecting elite. While the job requires, on paper, that the employee adopt a certain set of responsibilities that may appeal to a wide audience of potential legislators, ultimately the perks and pitfalls of being a public official become deciding factors for anyone contemplating a run. In an ideal system, those who are best at lawmaking and compromise would ascend to the highest ranks of Congress; in our system– the best of all known political systems– those that assume leadership roles must revel in the cruelty of the national spotlight. There is something of the circus animal in the modern national-level politician, a “look what I can do!” bombast that has little to do with the actual job description and far more with the perks and pitfalls of the limelight.

It’s not all bad news, however: the halls of Congress also attract the sort of overachievers, bookworms, and legal perfectionists that revel in the knowledge that their words have consequences. Most of the work they do doesn’t make the Washington Post, let alone daytime coverage on C-SPAN. Those with a only passing interest in government and a passion for being important no longer need to bother with actual politics– that’s what cable news and existentially troubling national bus tours are for.

Ultimately, the job attracts only the thickest-skinned of publicity hounds, who may or may not, on occasion, also understand how to run a government. The reason Mitch Daniels isn’t in the running for 2012 but Donald Trump is, somehow, is the same reason Ronnie Magro stars in Jersey Shore and not RuPaul’s Drag Race, is the same reason Rep. Nancy Pelosi is in Congress and not working for a private think tank, and why some of our potentially greatest legislators work on their passions from the anonymous chambers of the Brookings Institute or the Heritage Foundation. Political journalism, believe it or not, is a multi-million-dollar industry, and politics is America’s national sport. The horse race, the soundbite, and the gaffe are as vital to the health of the Republic as anything sponsored on the Floor.

The system is built to attract a certain genre– someone who doesn’t mind fraternizing with lobbyists and pouts when his or her name isn’t in that morning’s edition of Mike Allen‘s Playbook. And while Rep. Cantor may now be the chosen one to carry the mantle of “everything that is wrong in American politics today,” to isolate him as the exception would be to veil our eyes from the reality that the compulsions of his ego are no different than that of most national politicians, and that without it he– nor anyone else in Congress– would have had the fire in the belly to run for office in the first place.

Does it make Rep. Cantor an unsympathetic, sniveling brat to have spent a very important meeting on the future of this nation pushing the President’s buttons, only to run wailing into the welcoming bosom of the press after being spanked by the Presidential chancleta? Sure, but it does nothing to distinguish him from the menagerie of peacocks, show dogs, and assorted preening wild things grazing about their natural habitat, the halls of the Capitol Building.