New TIME Magazine Cover Story On Illegal Immigrants: ‘We Are Americans…Just Not Legally’

In what is sure to upset those who favor stricter immigration controls, this week’s cover of TIME magazine features the images of undocumented immigrant men and women from around the world, with the headline “We Are Americans*, subtitled “*Just not legally”.

Journalist Jose Antonio Vargas, who famously came out last year as an undocumented immigrant living in America, wrote the cover story arguing that despite his legal status, he too is a legitimate American citizen.

Vargas argues that the American immigration system is deeply broken, as it prevents legitimate people who self-identify as “many who identify as American, from residing in the country legally. The other men and women featured on the front cover with Vargas have also publicly admitted to their illegal immigration status.

“There are an estimated 11.5 million people like me in this country, human beings with stories as varied as America itself, yet lacking a legal claim to exist here,” Vargas wrote in the article. “I founded a campaign called Define American, to document the lives of the undocumented and harness the support of our allies around this very controversial and misunderstood issue.”

At the age of 12, Vargas was brought to the United States by his family using a fake passport. He didn’t know he was illegally here until he was 16 and attempted to obtain a driver’s permit. He argued that people in his home country of the Philippines wait several decades for the proper visas to come to the United States, indicating that the system is broken and harms those who want to come to America for legitimate reasons.

Check out the new TIME cover below: 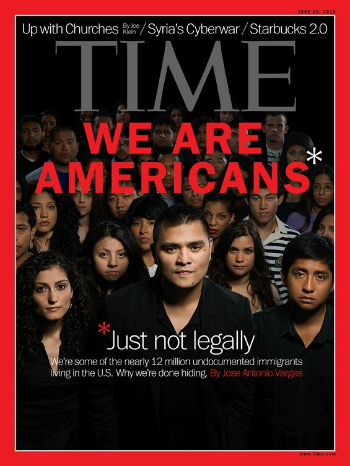