Newspeak Gone Mad: What 119 Banned Words Sound Like In One Sentence

Newspeak Gone Mad: What 119 Banned Words Sound Like In One Sentence 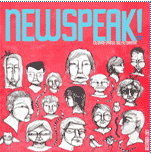 Probably Tribune Company CEO Randy Michaels did not expect so much attention when he sent out a memo banning the employees of his flagship radio station from using 119 words on air, or for asking them to spy on eachother. But he did. And now NPR has jumped into the fray and done what I imagine every single employee who received that memo desperately wanted to do after reading it. They have put all the words in one sentence. Behold this ‘perfect storm’ of newspeak:

In other news, stay tuned, because in our top story tonight, some really good (or bad) news: as expected, in a surprise move yesterday, informed sources say, a world class icon, diva, mother of all motorists, and famed undocumented alien, lauded for putting area residents at risk and in harm’s way, but at this point in time behind bars for allegations that — according to sketchy details that, to be fair, have officials and authorities under fire for speaking out — he reportedly engaged in shower activity with all of you folks at 5 am in the morning, underwent surgery, utilized an undisclosed vehicle in torrential rain in a near miss manhunt when it was time for a break, literally fled on foot, completely surprised his mother with a clash with bare naked police behind closed doors, definitely possibly completely destroyed a medical hospital under false pretenses, and is lucky to be alive after, the fact of the matter is, he lent a helping hand to a legendary incarcerated pedestrian lone gunman (the perpetrator who over in a neighboring state, perished in a perfect storm of no brainers and things that went terribly wrong, and was plagued by killing sprees in which he gave 110% only to have his senseless murders marred by the untimely deaths of guys and folks whose fatal deaths came in the wake of auto accidents, and while it may be a mute point, let’s everybody touch base on the fact that he was under seige in the wake of unrest after shots rang out in close proximity of the best kept secret on the campaign trail which had authorities reeling up in one place and down in another, and going forward, the alleged aftermath of the death toll for youths behind the podium exceeds those out there, down there, and out in that other place by a two to one margin), is seeking white stuff for those of you that want it, and thus, we’ll explain what he did when we’ll be back — we’ll be right back, after the break and after these commercial messages, and we say “we’re back,” “welcome back,” or “welcome back everybody.”