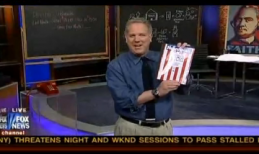 Then I realized: to find out, I would have to experience Beck firsthand. I would have to enter the belly of the beast. So last week I decided to submit. Every day for five straight days I would I tune my television to Fox News at 5 p.m. sharp. I would see what I could see.

— Newsweek reporter Andrew Romano decides to find out what all the fuss about Glenn Beck is about.

How courageous! A whole five days in a row. It’s utterly amazing he’s still able to speak in full sentences. Of course, he could have avoided the belly of the beast entirely and just scrolled through here (or called!) but whatever. Let’s see what conclusions he draws from his heroic Beckian marathon.

The reason we pay attention to Beck is that he both comforts and flatters his audience; he makes them feel good, and good about themselves. And by “them” I mean the two groups that obsess over Beck the most: tea partiers and liberals.

Why the Liberals? Says Romano: “In an era of massive problems and extreme change—the Great Recession, the health-care overhaul, etc.—liberals can avoid the difficult question of whether Obama is leading America in the right direction by simply telling themselves that the only alternative would be someone like Glenn Beck: hyperbolic, demagogic, irrational, and slightly unhinged—”just like all conservatives.”

And this is why the mainstream media pays attention, according to Romano: It’s not just that he generates drama and conflict. It’s that the current narrative—reasonable Democrats vs. unreasonable conservatives—requires exactly the sort of drama and conflict he generates. There’s a reason that Obama highlighted Beck’s “troublesome” “vitriol” in a recent interview, and there’s a reason that every media outlet in the country reported on it.

No. To most of it actually. I think Andrew Romano has managed to entirely miss the point here. As in yawn. I’m not rehashing why I think Glenn Beck is so successful, or what his larger ambition is trying to accomplish, or why the media pays attention to him, because I have done so before (ad nauseam according to some!). However, I will say what amazes most about this 5-day takeaway from Beck-land is how utterly boring Romano manages to make Glenn Beck sound. That’s quite a feat! Beck is a lot of things but boring is rarely one of them. I mean if this was your first introduction to Glenn Beck would you even bother to tune in? Not likely. So maybe inadvertantly Andrew Romano has offered a solution to the problem (ahem White House) of what to do with Glenn Beck. Turn him into the required college course everyone tries to avoid taking! Voila. Because that’s what this piece sounds like – a required term paper on a subject you have no interest in beyond course credit.

Bonus! Below Glenn Beck takes Newsweek to task for this week’s cover story on why the recession is over. It’s been a bit of a trend this week actually: Beck is less than pleased that according to the MSM certain things might actually be getting better under Obama.