Lou Dobbs Talks (And Talks, And Talks…) Punditry And A 2012 Run In GQ Profile 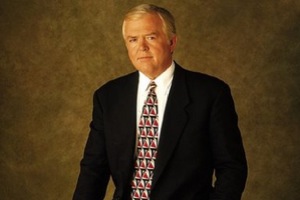 Here’s a blast from the past, in cable news time: former CNN anchor and current radio host Lou Dobbs has inexplicably popped up in an extensive 6-page profile in GQ, railing against bad grammar, illegal immigrants, potholes and stopping his endless ranting for a few seconds to suggest he is running for president in 2012.

Author Jeanne Marie Laskas goes through great lengths to present to us “the other side” of cranky old “Mr. Independent,” visiting his home, meeting his family, and spending some quality time with him. She notes that she is mystified by the way the left has demonized him when, in fact, Dobbs spends just as much time complaining about the right as he does about the left. More to the point, Dobbs will complain about anything and everything that is presented to him. The article opens with an apt metaphor for his brand of punditry: a tirade on good grammar in which, ironically, Dobbs makes a major grammatical error.  “You wouldn’t say, ‘I feel goodly’ or ‘I feel happily.’ So why do so many people say, ‘I feel badly’?” he asks.*

“It goes on like this. Hours and hours like this. Days like this,” Laskas laments. She tries to “fix” him by challenging his views on everything, especially illegal immigration, but he doesn’t budge. As she notes, he’s heard it all before. Even in the most trying times of her interview, though, she tries to be optimistic about the inner Dobbs that the bloviating radio host continually dwarfs, and in doing so she gets at the core of Dobbs’ problematic personality: he has a serious lack of charisma in an entertainment realm where charisma alone sells.

I can’t even listen to that Lou, not for very long. I can’t listen to him cheer the oncoming East Coast blizzard as evidence that Al Gore is a blubbering fool. Radio Lou, to me, becomes a dull hum, like so many other dull hums—not nearly as frightening as [Glenn] Beck or as deranged as [Rush] Limbaugh or as egomaniacal as [Bill] O’Reilly, but among the same chorus.

He’s Mike Huckabee without all the God; he’s Bob Dole after the 1996 campaign. (He could tell jokes!) He’s Ronald Reagan with a reachable heart. And yet affable suggests he works at it, a glad-handing smiling salesman with some charm offensive.

He somehow manages to have every quality a successful pundit needs– knowledge, experience, anger, et al– without any of the charm. There’s no Beckian twinkle in his eye or, on his radio show, mischief in his voice. There’s no unintentionally comical delusion (it’s not funny when he does it). There’s no endearing quirk in his dogma. In fact, using the term “rant” is slightly biased to his favor; Dobbs doesn’t rant– he drones.

And this is precisely why no one ever quite gets around to hating him. If you’re liberal, you have a laundry list of bigger fish to fry. If you’re a conservative, you probably don’t remember his outrageous vacations to Cuba in the ‘90s when he was imploring the Clinton administration to negotiate with a tyrannous regime. He his ability to inspire apathy is bipartisan.

And bipartisanship may be exactly what Dobbs is setting out to foster. It appears he is not exclusively interested in being seen as a fascinating media personality, which would be a good thing for him since “fascinating” is a far cry from what he has become. In fact, being a fascinating media personality is probably detrimental to his actual aspirations: running for President. He continues to play the “neither confirm nor deny” game in various intensities within the interview as Laskas tries to catch him by surprise– in the car, at home, during dinner. Although she fails to get a definite yes or no, Laskas gets close enough to breathlessly concluded “Oh my God—you’re running for President.”

With all the speculation surrounding a possible run against New Jersey Senator Bob Menendez, the presidency rumors add a new layer to the Dobbs persona– one that would fall within the context of national players like Sarah Palin, Ron Paul, or Mike Huckabee. Sure, alone Dobbs is the media equivalent of watching paint dry while being nagged to take out the trash by your mother. But surrounded by larger-than-life characters, some of which rely on the false belief that they, too, have charisma, Dobbs could be a game-changer for entertainers looking for a political laugh– a solid replacement for 2008 candidate Fred Thompson. Maybe a presidential run is precisely what Dobbs needs to find a likable identity.

*(People don’t say “I feel goodly” because “goodly” is not a word. They say “I feel well.” Conversely, they can also say “I feel badly” when they wish to modify the word “feel,” and not the pronoun. “Happily” rarely modifies “feel” because when modified it usually refers to health and not mood.)