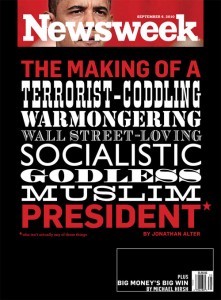 Newsweek is not going down without a fight. This time with conspiracy theorists who are, as the Internet long ago discovered, a reliable source of traffic if not the most ideal cornerstone on which to build a readership. The newsweekly, which was recently sold and has been hemorrhaging employees all month, has once again opted for a shocking (dare we say bloggy) cover presumably in an effort to move copies off the stand.

The cover reads: “The Making of a Terrorist-Coddling, Warmongering, Wall Street-Loving, Socialistic, Godless Muslim President * (* who isn’t actually any of these things)”

Our maddening times demand that the truth be forthrightly stated at the outset, and not just that the president has nothing in common with the führer beyond the possession of a dog. The outlandish stories about Barack Hussein Obama are simply false: he wasn’t born outside the United States (the tabloid “proof” has been debunked as a crude forgery); he has never been a Muslim (he was raised by an atheist and became a practicing Christian in his 20s); his policies are not “socialist” (he explicitly rejected advice to nationalize the banks and wants the government out of General Motors and Chrysler as quickly as possible); he is not a “warmonger” (he promised in 2008 to withdraw from Iraq and escalate in Afghanistan and has done so); he is neither a coddler of terrorists (he has already ordered the killing of more “high value” Qaeda targets in 18 months than his predecessor did in eight years), nor a coddler of Wall Street (his financial-reform package, while watered down, was the most vigorous since the New Deal), nor an enemy of American business (he and the Chamber of Commerce favor tax credits for small business that were stymied by the GOP to deprive him of a victory). And that’s just the short list of lies.