No, The New York Daily News Is Not A Conservative Paper – Their Endorsement Of Mitt Romney Is Huge

No, The New York Daily News Is Not A Conservative Paper – Their Endorsement Of Mitt Romney Is Huge 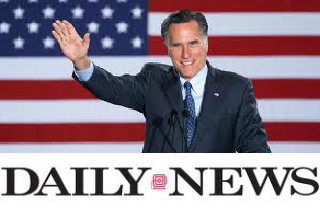 On Sunday, The New York Daily News published an editorial announcing their choice for the next President of the United States. In 2008, that candidate was Barack Obama. In 2012, it is Mitt Romney. Some on the left have dismissed this endorsement as expected or typical for the paper – but this a groundless assertion. The New York Daily News has a solidly left-leaning editorial page. Their endorsement of Romney is a striking departure from the paper’s editorial vision. It is also a significant endorsement.

The Daily News’ editorial endorsement is equal parts complimentary to Romney and a condemnation of Obama’s record in the presidency. The editorial’s more-in-sorrow attack on Obama centers on his lack of interest in bipartisan compromise and his expansion of the federal government’s debt and deficit.

Along the way, he appointed a bipartisan commission to devise a plan for restoring America’s fiscal health, but he abandoned the panel’s menu of spending cuts, entitlement reductions and tax reform. Finally, Obama failed to close a deal with Republican House Speaker John Boehner for budgetary discipline and a path to job creation.

That was 15 months ago. Since then, Obama has presided over paralysis….

In deficit on the balance sheet, he stepped to the front in ratcheting up sanctions against Iran only after the country’s regime had moved ominously close to nuclear weapon capability, and he executed a misguided strategy for achieving peace between Israel and the Palestinians that left the parties further from a settlement. But those pluses and minuses pale in comparison with middle-class prospects in recommending whether to entrust Obama or Romney with the future….

Romney’s approach is the stronger.

“The presidential imperative of the times is to energize the economy and get deficits under control to empower the working and middle classes to again enjoy the fruits of an ascendant America,” the endorsement concludes. “So The News is compelled to stand with Romney.”

Many on the left have dismissed the endorsement. Some have suggested that The New York Daily News’ editorial page is as reliably conservative as the right-leaning New York Post. It is not.

The evidence? One does not have to sift through the pre-Obama-era archives in order to find examples of left-leaning op-eds at The New York Daily News. A few examples from just the last two weeks demonstrate that The Daily News is quite welcoming to left-leaning writers.

On October 18, Princeton University professor Sean Wilentz took to the Daily News’ editorial page to contend that Mitt Romney is a “captive to the far right.”

Romney had to go to great lengths to start sounding like a moderate again. But let’s be clear: The hard right and its backers define today’s Republican Party. And if Romney is to win — and then govern the way he’s sounding now — he’ll have hell to pay inside his own party.

On October 25, Democratic strategist Zerlina Maxwell lambasted the Republican party and their nominees for president and vice president in an op-ed entitled “What the GOP Really Thinks About Women’s Rights.”

“[T]he views that Akin, Mourdock and Ryan have on abortion do not make them extremists within the Republican Party; those views make them the status quo,” Maxwell wrote.

Just six days ago, The Daily News ran an op-ed hammering Indiana Republican Senate candidate Richard Mourdock over his comment during a recent debate in which he suggested that a child conceived by rape was nevertheless intended by God.

“American women are about to teach radical Republicans what can happen when you take an entire demographic for no more than easily-manipulated fools,” wrote Stanley Crouch on The Daily News’ editorial page.

Only yesterday, The New York Daily News published an op-ed by David Swerdlick in which he details extensively why he thinks the notion that President Obama failed to work with Congressional Republicans over the course of his first term is a myth.

Swerdlick notes that on issues like the American Recovery and Reinvestment Act, the bipartisan makeup of his Cabinet and a pre-midterm budget deal were negotiated in good faith with opposition Republicans. However, due to their recalcitrance, Obama was forced to pursue his legislative goals with only the support of members of his own party.

Swerdlick contention stands in direct contrast with the primary reason the paper endorsed Romney – Obama’s lack of interest in working with the opposition party.

The Daily News endorsement will not swing many voters in New York City. In the swingy suburbs of the city in Long Island, West Chester County and the Republican-leaning and Hurricane-ravaged boroughs of Queens and Staten Island, however, the editorial gives voice to many voter’s frustrations with the White House.

This was not a typical endorsement. It was extraordinary.

Read the full endorsement via The New York Daily News