Note To Keith Olbermann on Twitter Report: You Don’t Need To Say ‘At’ 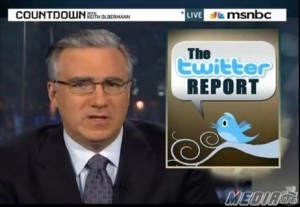 Countdown host Keith Olbermann is a recent, welcome addition to the Twitter community, and his “Twitter Report” is a welcome addition to the show. As such, this is not, in any way, meant to dissuade him from doing the segment, but rather to fine-tune it. Mr. Olbermann? When you’re reading people’s Twitter names, you don’t actually have to say “at.” <

Here’s another hint that may come in handy. When speaking a hashtag aloud, you also don’t have to say the word “hashtag.” You just say the hashtagged phrase in a lower, quicker voice like Goldmember, or Kevin Nealon‘s Mr. Subliminal.

Keith is, of course, not alone in the struggle to translate Twitterese into real-life speech. I find lots of my IRL friends peppering their phone conversations with references to “Ed Henry-See-En-En” or “unfollowing” their girlfriends. OK, I made that last one up.< Other than that, the segment is a great way for Olbermann to interact with, and perhaps cross-pollinate, his TV and Twitter audiences. Like Chuck Todd before him, Keith has become an effective ambassador for Twitter, quickly leveraging it to enhance the experience of both sets of followers.

I would encourage him to do more interaction with non-fans on Twitter, and highlight those interactions on the show. The audience that loves to hate him is probably a vast untapped resource, and a great way to glue some more eyeballs to the show. But something tells me that you have your own ideas on how best to proceed.