NRA Tells Open Carriers to Dial Back a Few: You’re Being ‘Downright Weird’ 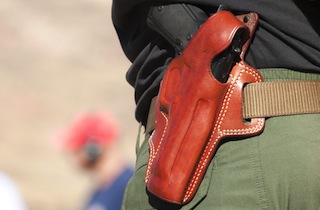 Following a string of incidents resulting in multiple restaurant chains putting the kibosh on guns in their stores, the National Rifle Association released a statement Friday chastising open carriers for “downright foolishness” and calling for more discretion, lest the sight of heavily armed groups descending upon public spaces backfire (a-HEM) and produce more stringent gun restrictions.

“Here at NRA, we are big fans of responsible behavior … legal mandates, not so much,” the NRA’s legislative arm wrote, though one should consider a legal mandate about using two spaces after a period, which is not what the Founders intended.

The organization continued, with its own emphasis:

As gun owners, whether or not our decisions are dictated by the law, we are still accountable for them. And we owe it to each other to act as checks on bad behavior before the legal system steps in and does it for us. If we exercise poor judgment, our decisions will have consequences. These consequences could be simple and transitory, such as watching a trophy buck bound away into the woods after a missed shot from an improperly sighted rifle. They could also be lasting and consequential, such as turning an undecided voter into an antigun voter because of causing that person fear or offense.

[…] Recently, demonstrators have been showing up in various public places, including coffee shops and fast food restaurants, openly toting a variety of tactical long guns. Unlicensed open carry of handguns is legal in about half the U.S. states, and it is relatively common and uncontroversial in some places.

Yet while unlicensed open carry of long guns is also typically legal in most places, it is a rare sight to see someone sidle up next to you in line for lunch with a 7.62 rifle slung across his chest, much less a whole gaggle of folks descending on the same public venue with similar arms.

Let’s not mince words, not only is it rare, it’s downright weird and certainly not a practical way to go normally about your business while being prepared to defend yourself. To those who are not acquainted with the dubious practice of using public displays of firearms as a means to draw attention to oneself or one’s cause, it can be downright scary. It makes folks who might normally be perfectly open-minded about firearms feel uncomfortable and question the motives of pro-gun advocates.

[…] NRA certainly does not support bans on personalized guns or on carrying firearms in public, including in restaurants. We think people are intelligent enough to resolve these issues in a reasonable way for themselves. But when people act without thinking, or without consideration for others – especially when it comes to firearms – they set the stage for further restrictions on our rights. Firearm owners face enough challenges these days; we don’t need to be victims of friendly fire.

Yup, that’s the NRA warning gun owners against “acting without thinking” because it might lead to the “lasting consequence” of gun restrictions — not, you know, people being shot.