As the Huffington Post’s Michael Calderone first pointed out on Twitter, The New York Daily News chose last month to blur an image of a supposedly offensive Charlie Hebdo cartoon depicting the Prophet Muhammed, but had no problem publishing uncensored images of ISIS burning Jordanian pilot Muath al-Kaseasbeh alive on its website today.

In the immediate aftermath of the terror attack on Charlie Hebdo’s Paris offices, the Daily News included in its report an image of murdered editor Stéphane Charbonnier standing amidst the rubble of his office following a 2011 firebombing. The photo was taken by Agence France-Presse/Getty photographer Alexander Klein, but in the version used by the New York paper, the controversial magazine cover he was holding up was blurred out: 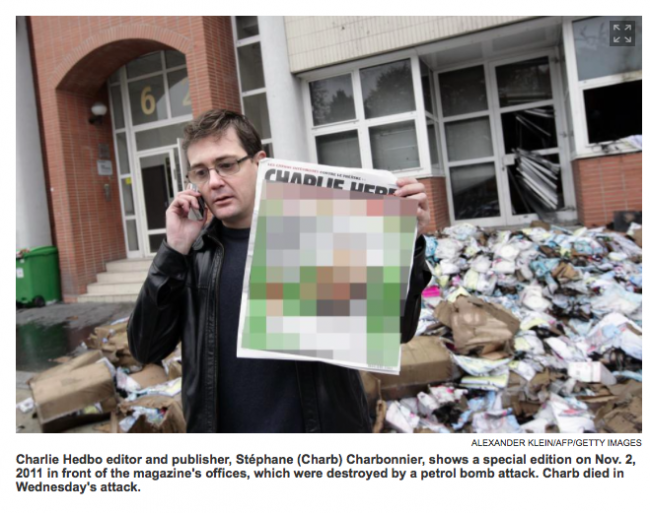 By the time Charlie Hebdo released its first post-attack cover, also featuring a cartoon of Muhammed, the Daily News appeared to have changed its policy and published that image on its website less than a week later.

Then, today, with news that ISIS had killed its Jordanian hostage, the paper began promoting its coverage this way:

As promised, the accompanying article includes still images of al-Kaseasbeh burning alive. We will not be including those graphic photos in this post, but below you can see how the paper is promoting the story on its homepage: 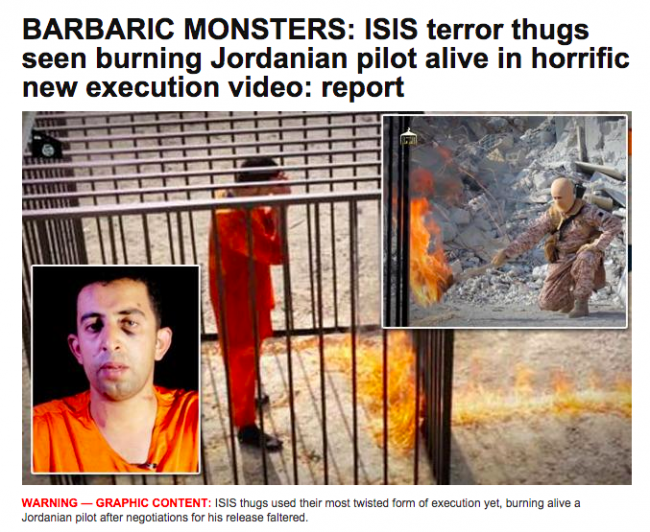 Following the Charlie Hebdo attacks, major news organizations like The New York Times and CNN faced criticism for their decisions to censor the controversial cartoons. But unlike The New York Daily News, those outlets have not also shown images of what is widely considered to be terrorist propaganda.