NY Post Columnist Rips Obama, Claims He Would Lose ‘New Cold War’: ‘I Want A Putin On Our Side’

NY Post Columnist Rips Obama, Claims He Would Lose ‘New Cold War’: ‘I Want A Putin On Our Side’ 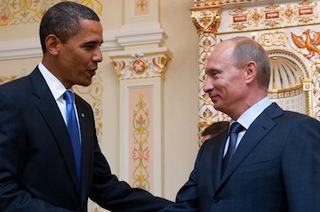 “The photo of President Obama and Russian boss Vladimir Putin sitting glum-faced at the G8 summit sparked talk of a new Cold War,” began Michael Goodwin’s column in Sunday morning’s New York Post. “Let’s hope not, because we would lose this time.”

This was inevitable. As soon as Hong Kong allowed NSA leaker Edward Snowden to leave the country despite the U.S.’s request to detain him—and especially after Snowden landed in Moscow, which figures like Chuck Schumer said could only have happened with Putin’s approval—someone, somewhere was going to write about how Obama’s foreign policy had enervated American’s global standing to the point that countries no longer jumped at our command.

Goodwin actually goes that judgment one further: “Whether negotiating over Syria or arm-wrestling, I want a Putin on our side. He knows his country’s national interests and is prepared to pursue them. We, on the other hand, have a president who increasingly lives over the rainbow.”

Obama’s speech in Berlin last week, in which he pressed for nuclear disarmament, first drew cackles from the conservative press for its poor contrast of a 4,500 invite-only crowd to the 200,000 Obama drew as a candidate in 2008. But in the last few days, right wing commentators have increasingly criticized Obama’s choice of topics as naive or foolish, and indicative of his detached foreign policy. (Pro tip: Noah Rothman beat them to the punch.)

“Forget the world as it is,” Goodwin wrote, “let’s dream about the world we want. Maybe throw a little pixie dust in the air and wish for a pony, too. Dreaming has its time and place, but it is no substitute for action that might make the world safer here and now.” This assessment was quickly echoed by Jim Pinkerton on Fox News, who accused Obama of living in a “liberal la-la land.”

Goodwin argued that Obama’s lack of forceful action on foreign policy crises have emboldened America’s enemies. “Our allies must be shaking,” he wrote, “knowing Obama won’t stand up to the bullies. And who can blame a Karzai in Afghanistan or an al-Maliki in Iraq for tilting away from us? We’re short-timers in their neighborhood.”

“Ah, but wait, the president does have an epiphany,” Goodwin finishes. “The world needs to combat climate change immediately. Any day now, the White House promises, he’s going to set limits on carbon emissions from American power plants. It’ll be a bells-and-whistles speech, one for history, aides say. That will certainly put a smile on Putin’s face. After all, America is surrendering another piece of its economic future and he doesn’t have to fire a shot.”