NY Times Concludes James Comey Gave Election to Trump, But What About The Times Itself?
Opinion

NY Times Concludes James Comey Gave Election to Trump, But What About The Times Itself? 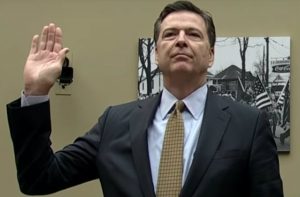 Today, the New York Times is out with a comprehensive report into how FBI Director James Comey handled investigations into both presidential candidates during the 2016 election. Their conclusion seems to be that Comey, in overreacting to Hillary Clinton’s self-inflicted wounds, effectively handed the election to Donald Trump.

On the surface, the reasoning behind this thesis is rather sound. Comey made a show of reopening the investigation into Hillary Clinton’s private email server less than two weeks before the polls closed. Meanwhile, there was (and still is) an ongoing FBI investigation of whether the Trump campaign had colluded with Russia, about which Comey was completely silent.

Polls clearly showed that Hillary was in command of the race before the now infamous Comey letter to Congress. I was among the many commentators who strongly believed that, before this letter, Hillary was a virtual lock to win. The data overwhelmingly suggests that, if not for Comey’s intervention, she would have won the series of very close states which all broke for Trump at the very last minute and gave him his margin of victory in the Electoral College.

Perhaps the most interesting/telling thing about the piece in The Times is that it was this very belief that Hillary was sure to win which probably forced Comey, against FBI policy, to come out publicly. After all, the thinking went, if he sat on the revelation that there were new emails to investigate and this then came out after she won the election, the credibility of the entire FBI would suddenly be in grave jeopardy (especially when Trump had been continually claiming that the election was “rigged”).

From Comey’s perspective this feels, while intellectually defensible, mostly like a classic butt-covering maneuver. It sure seems like they could have done some cursory investigation first to determine if it was likely that anything significant came from the “new” batch of suddenly found emails, before making such an incendiary pronouncement. It is fascinating to note that, according to The Times, had the FBI known they could have gotten through all the emails before the election, this is exactly what they would have done.

So basically it now appears we elected Donald Trump our president because no one at the FBI realized that they had the ability to scan through all these documents and quickly realize that there was nothing significant, or even really new in them. Seriously?!

Missing from all of this analysis however is the metaphorical elephant in the room. That is, had the news media, of which The Times is of course a leading influencer, not completely overreacted to what was essentially little more than a technical communication, the impact would likely have been minimal and hardly decisive.

I wrote at the time of the Comey letter that the media was grossly overreacting to the story because I sensed that there was nothing really there. It turns out I was dead right about that, but I was also extremely wrong about the ultimate result that this media freak-out would provoke. It just never occurred to me that late deciders, who obviously hadn’t yet bought into the very tough sell of a Trump presidency, would suddenly surge to him over what seemed like a relative nonissue, especially one which had presumably already been baked into their personal electoral cake.

The ingredient of this cake which I underestimated (it seems Comey must have as well) is the “connection” that these emails had to the investigation of Anthony Weiner’s alleged sexting of an underage girl. Even though it was technically completely irrelevant to the essence of the story, this juicy angle spread gasoline on an already combustible story. From the media’s perspective it made the development WAY more titillating, and for voters it made it all appear far more unseemly and scandalous.

It is also important to note that had Hillary not been appearing to be pulling away just before the Comey letter, it is reasonable to presume that the news media, including The Times, would have exhibited far more restraint in their coverage of it. In a sense, they were like referees who gave a make up call for a team that they didn’t think could actually win and therefore there wouldn’t be any real harm.
The news media felt that, by obsessing over Comey’s action, they would restore some ratings-friendly drama to an election outcome which was on the verge of becoming boring. Well, they certainly got what they wanted, and then some.

It always amuses me that the news media is irate and frustrated that they weren’t able to stop the unthinkable Trump presidency from becoming a reality. After all, if they were really concerned about saving their credibility so they can be taken seriously when it really counts, perhaps some of them shouldn’t have spent months chasing a missing Malaysian plane. Similarly, maybe they shouldn’t have gone nuts over a half-page letter which turned out to nothing, all because they wanted to squeeze every last drop of ratings out of an election cycle which had already provided them with a bountiful harvest.

Yes, if Comey had stayed silent like he probably should have, Trump would not be president. But if the news media hadn’t stuck its grubby hands in the cookie jar one too many times in reaction to him, he still wouldn’t have been.