NY Times Photographer: Here’s Why There Are No Pics of Hamas Fighters

NY Times Photographer: Here’s Why There Are No Pics of Hamas Fighters 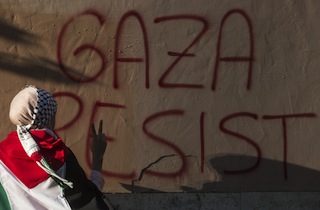 In all the wrenching visual images to emerge from the four weeks of hostilities betwene Israel and Hamas, one subject has been noticeably absent: Hamas fighters. This has led some to allege that the New York Times, for instance, is “silently but happily complying with a Hamas demand that the only pictures from Gaza are of civilians and never of fighters”; this disparity is the subject of a Twitter fight happening at this very moment.

But according to twice-Pulitzered NYT photographer Tyler Hicks, there’s no conspiracy to hide Hamas fighters from exposure or bias that views Israel as the militaristic aggressor. It’s more that Hamas operates covertly, making it next to impossible to get images of its soldiers; if Hicks can find them, in other words, so can Israeli drones. As he told a Times photography blog:

This is a war fought largely behind the scenes. Hamas fighters are not able to expose themselves. If they were to even step a foot on the street they would be spotted by an Israeli drone and immediately blown up. We don’t see those fighters. They are operating out of buildings and homes and at night. They are moving around very carefully. You don’t see any signs of authority on the streets. If you can imagine every police officer, every person of authority in America gone, this is what that would look like.

If we had access to them, we would be photographing them. I never saw a single device for launching the rockets to Israel. It’s as if they don’t exist.

Sometimes people assume that you can have access to everything, that you can see everything. But the fighters are virtually invisible to us. What we do as photographers is document what we can to show that side of the war. There are funerals, there are people being rushed to the hospital, but you can’t differentiate the fighters from the civilians. They are not wearing uniforms. If there is someone coming into the hospital injured, you can’t tell if that’s just a shopkeeper or if this is someone who just fired a rocket towards Israel. It’s impossible to know who’s who. We tried to cover this as objectively as possible.