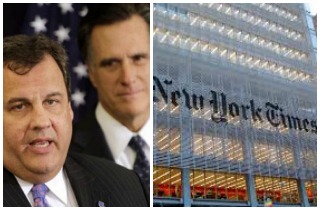 If you thought the political press was taking stock of its 2012 election year coverage of Mitt Romney’s campaign and was preparing to make some course corrections in order to ensure fairer coverage of the GOP candidates ahead of 2016, you would be mistaken. Indeed, the New York Times appears to view 2012 not as an aberration but as a model for how to cover future Republican presidential campaigns.

The first indication that the Times is gearing up to make a Mitt Romney out of Chris Christie came in early December as “bridge-gate,” the allegation that New Jersey’s governor sought to punish the mayor of Fort Lee by closing two lanes of the George Washington Bridge for a traffic study for days in September after the mayor refused to endorse Christie’s reelection, burst off the pages of left-leaning blogs and into mainstream media outlets.

On the 13th, the Times covered “bridge-gate,” but an investigation into the supposed facts behind that case took a backseat to the Time’s preferred narrative; Christie, the “bully.” To cement that narrative, the Times quoted a variety of Democratic New Jersey lawmakers on the record who described how their confrontations with Christie made them feel bullied. Some even remarked how Christie had created an “atmosphere” which invited other state officials to treat New Jersey Democrats with contempt. Days later, a Times reporter told CBS News’ This Morning that, as the “front-runner for the nomination in 2016,” the governor’s bully reputation could seriously damage his national political prospects.

Indeed, the politics of that story – and its potential to derail the Christie 2016 juggernaut – and not good governance appears to be the Times’ paramount concern. Tiny exculpatory details like the fact that Fort Lee’s mayor requested in 2010 that the governor’s office investigate ways in which they could relieve gridlock on the bridge, have been overlooked.

The letter indicates that [Port Authority Executive Director Bill] Baroni met with [Mayor Mark] Sokolich face to face in September 2010 to discuss the traffic issues and that he told Sokolich to contact him in the future “to address any concerns or grievances.” Sokolich has said he was ignored by the authority during the September lane closings.

The Times appears set to get more aggressive with Christie with the Friday announcement that Michael Barbaro, the reporter tasked with covering the Romney campaign in 2012, will be charged with repeating that performance ahead of 2016 by trailing the Garden State governor.

While Barbaro offered more than a handful of solid pieces of journalism during the campaign, he also filed a series of frustrating reports and provided President Barack Obama’s campaign with unearned fodder.

Take, for example, a series of tweets he issued in November of 2012 which created the impression that Romney’s staffers were refusing to let Pennsylvania rally attendees, including small children, leave a venue in spite of the subfreezing temperatures.

“’We’ve got to get out! My daughter is frostbitten,’ begs mom asking to leave Romney rally,” Barbaro tweeted. “Staffer replies: “It’s not cold enuf for that.’”

Barbaro later clarified that the staffer directed this flippant comment to reporters and not the frazzled mother, but the damage was done. This initial characterization of the event was seized upon by Obama campaign allies, in spite of the fact that it was later taken apart by other members of the media in attendance like BuzzFeed’s McKay Coppins, USA Today’s Jackie Kucinich, and even the Times’ Ashley Parker. Each filed reports indicating that all rally attendees who asked to leave the venue were allowed to do so immediately following the resolution of security concerns by Romney staffers.

Then there was Barbaro’s illuminating report on how Mitt Romney’s California home was a political liability for him because he was surrounded by several openly gay families.

It turns out that Mr. Romney — who has likened President Obama’s policies to socialism, called for cutting back on federal funding to PBS and wants to outlaw same-sex marriage — has moved into a neighborhood that evokes “Modern Family” far more than “All in the Family.” (There are six gay households within a three-block radius of his house, neighbors said.)

This report was simply too much for even The Nation reporter and MSNBC host Ari Melber who appeared on MSNBC in June of 2012 to “call bull” on the report and the Times itself. Melber cornered Times reporter Jodi Kantor and forced her to defend the “thin, silly story” which he called “an attempt – implicit or otherwise – to draw connection between [Romney’s] personal wealth and his candidacy.”

Melber added that it was troubling that the Times thought it was appropriate to task a campaign reporter to essentially publish what he characterized as a hit piece on Romney’s wealth – a theme which the Obama campaign had used as its centerpiece to attack the Republican presidential candidate.

Perhaps the Times believes its readers have short memories, or maybe the venerable print publication has simply dropped the pretense that there is a distinction between their journalistic pieces and the editorial page. In either case, Christie is in for a rough ride with the Times if he chooses to run in 2016. If the governor has any desire to win a presidential race in 2016, he will have two opponents with which he must deal forcefully and definitively; the Democratic nominee and the New York Times.