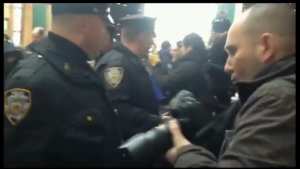 An NYPD officer who arrested a photographer as he snapped photos of a stop-and-frisk was convicted of a felony Wednesday for offering a false instrument for filing.

According to reports, Stolarik was taking photos of the arrest of a 15-year old girl when the altercation occurred. Officers on the scene shoved Stolarik’s camera and told him to “get the fuck out of there.” Stolarik stood his ground, continuing to film the officers and asking for their badge numbers; Stolarik asserts this is when officers turned violent, slamming him to the ground and “stepping on [his] head.”

Stolarik was charged with obstruction of justice and resisting arrest after allegedly hitting a cop in the face with his camera. Ackermann, one of the arresting officers, claimed Stolarik had repeatedly flashed his camera at the officer’s face in order to interfere with the arrest.

An investigation by the Bronx District Attorney’s Office revealed that Stolarik’s camera had no flash feature, and Stolarik denied claims that he hit anyone with his camera. “They just get to say whatever they feel like saying and then charging me with whatever they feel like charging me with to justify their actions,” he said in an interview. The charges against Stolarik were eventually dropped.

Officer Ackermann faces up to four years in prison.