NYPD Officer’s Toast: de Blasio ‘Nothing but a Whore’s Court Jester, Sucking the C*ck of Every Protester’ 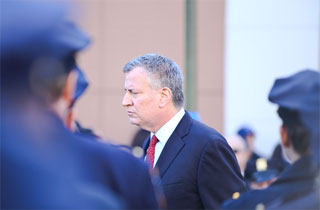 Over at the New York Review of Books, Michael Greenberg delves into the complicated relationship between the citizens, politicians, and policemen of NYC in the wake of Eric Garner‘s death. Among the details that became public: What happened in the bars after the funerals of two murdered policemen.

Shortly after the funeral of Officer Rafael Ramos, who was shot and killed with his partner Wenjian Liu late last year, Greenberg quietly entered a nearby bar in Queens, where dozens of NYPD officers had gathered, asking why they were held so much enmity for Mayor Bill De Blasio, whose comments about his own biracial son angered the police and prompted a slowdown:

Didn’t the blacks and the protesters merit at least a portion of their contempt? No, they said, I didn’t understand, the protesters didn’t count. They were just “followers,” “rabble-rousers,” “anarchists,” “know-nothing kids looking to make a scene.” When I suggested that this surely wasn’t true of every one of the 30,000 demonstrators on December 13, one of the officers shot back, “It was de Blasio’s fault that all those people showed up. He told them it was okay to spit in our faces. They knew we had been given orders to let them run wild.”

And then this happened:

A diminutive, white-haired sergeant climbed onto the top of his stool, silenced the bar, and in a booming voice delivered a rhyming toast that ended with the verse, “De Blasio is nothing but a whore’s court jester, sucking the cock of every protester.” The cops in the bar roared, and three or four officers followed with de Blasio–hating toasts of their own. Drinks flowed. A retired detective from Yonkers reminisced in great detail about the various suspects — or “mutts” — he’d clobbered and left for dead. When he saw me listening and obviously suspected I wasn’t “one of us,” he said, with an unconvincing smile, “None of those stories are true, understand?”

The rest of the article, which can be read here, is worth your time — especially in his analysis of the youth organizers eschewing the tactics of the Rev. Al Sharpton.