NYT Journalist Battles Critics Over Article About WaPo That Missed Sale: ‘I Wasn’t Played,’ ‘They Had A Secret’
TWITTER

NYT Journalist Battles Critics Over Article About WaPo That Missed Sale: ‘I Wasn’t Played,’ ‘They Had A Secret’ 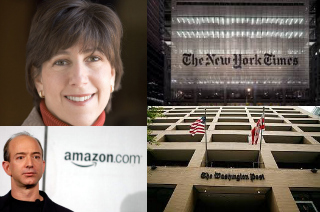 As of Monday morning, the most talked about article about the Washington Post was Sheryl Stolberg’s profile of publisher Katharine Weymouth, the fourth-generaton Graham to run the paper, in the New York Times. “Now, in an exceedingly difficult climate for newspapers,” Stolberg wrote, “Ms. Weymouth is charged with saving the crown jewels.”

The profile was published only a few days before yesterday’s epochal $250 million sale of the Washington Post to Amazon owner Jeff Bezos, a massive acquisition that was nowhere to be found in Stolberg’s long-researched story of the woman who was supposedly just inheriting the publishing reins.

On Tuesday, Stolberg maintained that the Graham family did not disclose any details of the sale to either her or the Times, even as she pressed them for information about the paper’s future.

“As you can see by the story, I asked the relevant questions of Don Graham and Katharine Weymouth,” Stolberg told Politico. “As I reported, Don Graham ducked questions about the future. Asked whether his niece would inherit his job, he said, ‘I’m not expecting her to go anyplace.’”

But neither did Stolberg feel “played” by the publishing dynasty, instead tweeting that her piece looked “prescient”:

Lots of talk about my Sunday @washpost piece, http://t.co/GjogpAXhE1 My take: Grahams sold the paper to save it. And no, I didn't know.

@SteveFriess I wasn't played. I pitched a story and I wrote it. I stand by it. They had a secret and kept it. Not much I can do about that.

@SteveFriess @RebeccaTheim @chaughney Hey, it was a secret $250 million deal. You think they would wreck it by leaking to the NYT?

@froomkin re your idiotic post, my story looks smart. it laid out the challenges and burden of being a Graham in a tough news economy.

@janebartman I now know why don graham ducked my questions about the future! He did tell me family control had been "a healthy thing."

@RebeccaTheim @SteveFriess @chaughney No chatter. And not for lack of asking. Don Graham should play poker.