Obama Is Apparently Running For Reelection Against ‘Party Of Limbaugh, Beck, and Palin’ 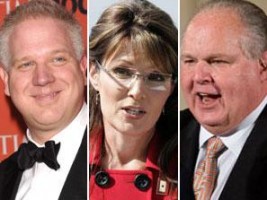 This is an interesting little nod to who the Obama administration really thinks holds the power in the Republican party. David Plouffe, the mastermind behind Obama’s 2008 campaign, is about to release the paperback version of his New York Times bestseller ‘The Audacity to Win: The Inside Story and Lessons of Barack Obama’s Historic Victory’ which recounts and explains the thinking behind that campaign. However, Mike Allen reports that the paperback version has been changed to include a new subtitle, which now reads: “How Obama Won and How We Can Beat the Party of Limbaugh, Beck, and Palin.”

Apart from underlining how few actual political candidates the GOP has in its line up, this appears to be an admission that Obama see his main opponent to be the (admittedly very powerful) conservative media. Of course, in the real world this is exactly who Obama is battling, but it’s strange to see it formalized in a book title, not to mention a questionable strategy. As I recall, the last time the Obama administration declared war on the conservative media it did not work out so well for them, in so far as the end result was them running from the specter of Glenn Beck straight into the Shirley Sherrod debacle. It should probably be noted that in the new forward Plouffe says “I can tell you that the president is not concerned with his reelection. He is focused on leading the country forward. We have no reelection campaign in the wings.” Something I we can all agree is less than 100% believable.

Of course, perhaps Plouffe just wants to sell some books. Something that Limbaugh, Beck, and Palin have all proven overly adept at.