I get it, President Obama. All jokes about drinking (and cooking with) your own pee aside, I realize that your upcoming appearance on Running Wild with Bear Grylls isn’t really an opportunity for you to learn survival skills from Bear Grylls. Rather, it’s an opportunity for you to advertise the White House’s climate change agenda before a national audience of millions.

So of course you’re up there in Alaska, having the time of your life with Grylls (and your security detail) while the two of you shoot footage for the show. Don’t lie — we know you two have already been canoodling. We’ve got the Instagram posts to prove it:

Glad this was the only Bear I met in the park. -bo

@POTUS such special moments all through this journey. & what you are doing to help protect our planet is inspiring.

Political affiliations aside, I’m totally okay with this.

What I am not okay with, however, is your blatant use of a selfie stick in this video posted by the White House’s Twitter account:

Watch @POTUS go behind the camera in Alaska to talk about the impacts of climate change: http://t.co/eAVC9RjeMV https://t.co/5y0EZH9RKi

Again, I realize it’s another part of your policy promotional tour in Alaska, but I just have one nagging question to ask you. Did you really have to use a selfie stick? 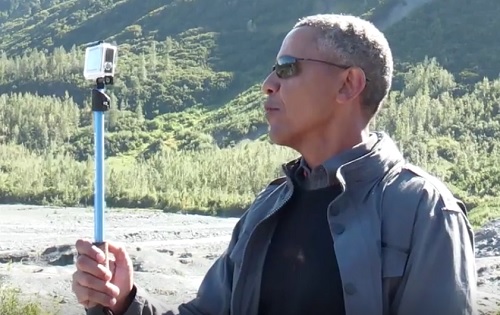 You know how much we here at Mediaite aren’t the biggest fans of this particular piece of, erm, “technology.” They keep popping up during the most inopportune moments in the media. In Wales, authorities suspect that a selfie stick held in the wrong place, and at the wrong time, might have lead to a hiker’s death.

But let’s face it, you’ve been a fan ever since BuzzFeed interviewed you back in February. So your blue, presidential selfie stick probably isn’t going anywhere anytime soon. At least, not for another year.