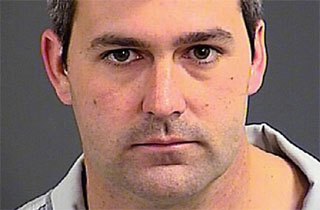 Officials in South Carolina confirmed that Michael Slager, the police officer filmed shooting a seemingly unarmed black man multiple times as he fled, has officially been fired by the North Charleston Police Department.

A graphic video released yesterday depicts Slager shooting Walter Scott, a 50-year-old black man, eight times in the back after he pulled Scott over for a traffic violation. Slager has been charged with murder after initially claiming that Scott had attacked him and attempted to grab his Taser. (The video depicts Slager dropping something, possibly the Taser, next to Scott’s body.)

“I have watched the video, and I was sickened by what I saw,” police chief Eddie Driggers said in a press conference today, according to The Guardian. According to him, Slager’s contract has been terminated, though he and his family will remain on the city’s health insurance until his wife, eight months pregnant, gives birth.

In addition, North Charleston’s mayor, Keith Summey, announced that the city has received a grant to equip equip its police with 101 body cameras, and plans to purchase 150 more cameras and train officers.

Officers in similar situations are normally not fired, nor do they usually get charged with murder: Daniel Pantaleo, the NYPD officer filmed putting Eric Garner in a chokehold and causing his death, was suspended without pay. Darren Wilson was placed on paid administrative leave shortly after the shooting death of Michael Brown; he later resigned from the force after he was found not guilty of Brown’s death.