Okay, So What Was the Deal With That Enormous Jacket Tom Brady Wore Yesterday?

Okay, So What Was the Deal With That Enormous Jacket Tom Brady Wore Yesterday?

So the Patriots beat the Steelers 36-17 in the AFC Championship game on Sunday. It’s the seventh AFC title for the Pats since 2001. And now they’re bidding for their fifth Super Bowl during that span and blah, blah, blah…

Whatever. Let’s get to the real story from Sunday night’s game: Tom Brady‘s sideline jacket. 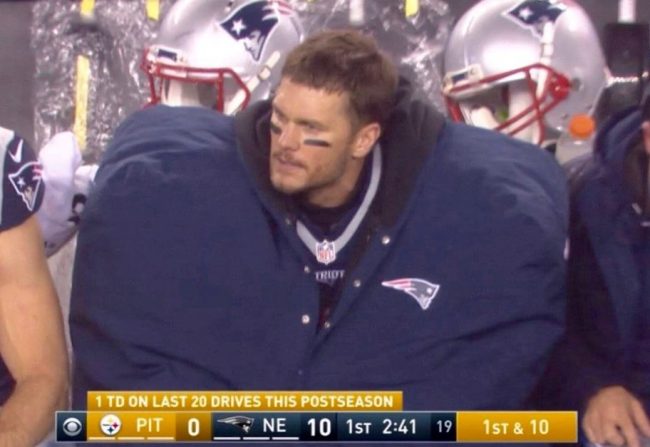 Look at that thing. It’s positively gargantuan. He could fit his entire offensive line under there.

Twitter had a field day with this thing. Here’s a sampling of the reaction.

Tom Brady looking like three kids in a big coat trying to sneak into an R-rated movie pic.twitter.com/w34josjbKk

i want tom brady’s coat…for when i have to sit on public transportation and need my personal space pic.twitter.com/NqKBPtNM2R

Why does Tom Brady’s sideline coat look like he’s in the cast of Little Rascals? #PITvsNE #TomBrady #IGottaCoatHeyHeyHeyHey pic.twitter.com/vdRbdBHfU7

“we’re not sure how they got the deflated footballs onto the field without being noticed” pic.twitter.com/6bcI64kYGl

Tfw ur trying to sneak a bottle of Jack past security pic.twitter.com/pvXzxJNPSP

I understand playoff tickets are expensive, but Tom Brady is a millionaire, he shouldn’t be sneaking people in under his coat. pic.twitter.com/zeOec8YYVm

When you mistakenly put the dryer on high heat pic.twitter.com/myoM55EYtv