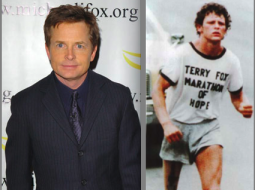 The world is certainly getting a large dose of Canada right now thanks to the Vancouver Olympic Games. As a Canadian, listening to the various coverage coming out of American media outlets can be either strange, hysterical, and at times at bit irritating — Canadians are not used to so much attention! So, I guess file this under sort of irritating. Last Friday morning Meredith Vieira, whilst talking about eventual Opening Ceremony flag bearer Betty Fox, speculated that as mother of “Michael Fox…who suffered from cancer, he started that marathon of hope” she might actually be the person who would light the Olympic cauldron. (In case you missed it, Wayne Gretzky did the honors.)

Except, as most Canadians will be happy tell you, Betty Fox is the mother of Canadian icon (I don’t use that word lightly) Terry Fox, who in 1980, at the age of 21, began a now-legendary run across Canada with one prosthetic leg to raise to raise money for cancer research (he raised more than $20 million). Sadly, he lost his battle with cancer before he completed the run (the Terry Fox Run, meanwhile, is now a international event). Michael J. Fox, while also a famous person from Vancouver, is neither suffering from cancer, nor dead, something viewers might have been confusedly lead to believe when his picture was flashed across the screen during the segment. Not good. Granted, not a mistake of international proportions, but also probably not a mistake a Canadian would ever make without immediately apologizing, such is the stature of Terry Fox in Canadian iconography. Video below. Thus ends today’s bit of CanCon.