On The Flipside: Former Obama White House Spokesman Is On The Romney Press Bus

On The Flipside: Former Obama White House Spokesman Is On The Romney Press Bus 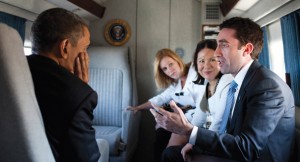 This may not be news, but it is news to me: Reid Cherlin, who served as the Obama administration’s White House spokesman on health care until he departed to pursue a journalism career last year, is embedded with Mitt Romney‘s traveling press corps. Cherlin writes for GQ now (a natural fit; Cherlin was always a snappy dresser at the White House, even giving Bill Plante a run for his sartorial money), and has lately been filing some must-read pieces from within the belly of the Romney beast.

The idea of a former political spokesman being embedded with his old boss’s campaign is intriguing on its own, a reversal of the necessarily restricting path that Jay Carney took from journalist to White House Press Secretary. While the insights Carney brought to bear on his new post are to the White House’s benefit only, Cherlin’s release into the media wilds allows him to share his perspective with the world.

I confess to not having kept up on Cherlin since his exit from the White House, but he popped back up on my radar when Politico‘s Dylan Byers recently flagged this bit of campaign poetry from Reid’s GQ coverage:

It is not the happiest of times aboard the Romney bus. The TV reporters are annoyed at the print reporters. The print reporters are annoyed at their lack of access to the candidate. The foreign reporters are clueless, trying to book international flights from mobile phones on a bus rapidly fleeing the last cell tower in Grant County. The veterans use their jackets and bags to block off double-seat refuges for themselves, but those, like me, who were late out of the hotel lobby sit two-by-two in the back (always the back, it seems); it’s so tight that when my neighbor types I feel his tendons working. Hanging over all of this, like the dust cloud following the coach, is the growing realization among the press corps that the Romney campaign doesn’t need them right now.

Reid’s dispatches from the Romney traveling circus have both a you-are-there immediacy and a wry sense of detachment that perfectly capture the experience of spending your days with very little chance of breaking any actual news. It’s an experience that Cherlin is uniquely qualified to describe, having once played the role of making sure no news got broken, and the effect can be almost comically palpable. From his first trip on the Romney campaign plane:

The most interesting thing that can happen on the plane—perhaps the only interesting thing—is that Romney ventures back to visit the press. According to frequent fliers, though, this happens rarely, and is either off the record or totally bland and news-less. Nevertheless, visits always cause a stir, because they (a) are out of the ordinary, (b) involve the candidate doing something other than standing in front of a giant flag, and (c) campaign correspondents tend to be high-strung and addicted to action of any kind. The problem, though, is that Romney will stop at the first of the 10 or so rows of reporter seats and go no farther, meaning that if you’re not seated in the first, say, five of those rows, you will see and hear precisely nothing. I know this because that is what happened to me last night when the Governor, as luck would have it, decided to mosey aft for a chat.

Aside from his unique combination of current and former perches, though, it also turns out that Reid Cherlin is a good, engaging writer, an ingredient that’s often under-appreciated in political journalism. Even so, when reading his coverage of the Romney campaign, it’s hard to resist a schadenfreude urge to wonder what Reid would write about watching the paint at the White House dry some days.