Opposing Trump Shouldn’t Be About Politics, It’s Really About Him Being a Dangerous and ‘Bad Hombre’
Opinion

Opposing Trump Shouldn’t Be About Politics, It’s Really About Him Being a Dangerous and ‘Bad Hombre’ 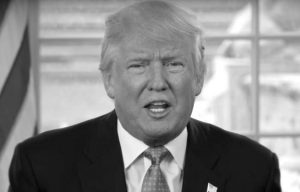 By now, the appeals have gone out far and wide to the 538 members of the electoral college: vote your conscience. You alone can stop Trump.

To be sure, it is this select group of men and women whose vote today determines the actual Presidency, and even celebrities like President Bartlet himself Martin Sheen have urged the electors — or, at least 37 of them specifically — to go “faithless” with their vote. Richard Schiff joined his West Wing cohort in the form of a viral video from Unite For America; it also featured Debra Messing, B.D. Wong, and Noah Wyle and other liberal Hollywood types. Add to the mix this weekend’s Saturday Night Live with a sketch featuring Hillary Clinton begging an elector to vote for anyone but Trump. “You don’t even have to vote for me,” Clinton says through cue cards skewering Love Actually. “Just vote for literally anyone else. Like, John Kasich. Tom Hanks. Zandaya. The Rock. A rock.”

It’s the latest last ditch effort by the coastal elites to derail the Trump Train, the Tweet-fueled momentum juggernaut that shot out of the station via a downtown escalator last summer and hasn’t stopped yet. And likely, it won’t stop with the electoral college having its say.

But what is getting lost in having famous liberals speak out against Trump is that even in the short time since the election, Trump has demonstrated that his lack of qualifications for the job have almost nothing to do with politics. And that, not his political party, is what should concern the electors and all Americans. After all, no President in modern history has taken the Oath of Office while still having so little of his own personal political ideologies be known. On just about every conceivable subject, he has — at one time of another — argued its stance as well as its exact opposite.

Climate change? It’s both a fictional invention of the Chinese for business growth and at the same time there is “some connectivity” to humans. On the border wall? “It’s not a fence,” and later, “There could be some fencing.” On gay marriage? It’s somehow both the accepted law of the land, but also he’ll strongly consider judges to overrule the Court’s decisions. Even on the electoral college itself, he has said it’s both “a disaster for our democracy” and later “actually genius.”

Instead, the pressure on the electors should be one of morality, psychological fitness for the position and existential principles of what the United States is and ought to be. Not an archaic Constitutional technicality, or a plea from our favorite West Wing actors. I get that in today’s world any chance to reference Alexander Hamilton by name is a sexy one; but the choice over Trump in Monday’s vote is about right and wrong, a personal judgment of a man who has belittled the disenfranchised and disrespected the very fabric of our nation. From his reckless tweets about everything from the media to foreign governments to his potential financial gain from the position to his bizarre insistence on remaining an executive producer of The Apprentice, Donald Trump isn’t just unqualified to be President, he is, and should be, downright frightening to Americans of all political persuasions.

We also don’t often have the morality debate on the national stage, assuming that such matters are too subjective and our moral compasses are all too misaligned to give universal declarations of what’s “right” and “wrong.” But regardless of vote, candidate of choice, or media outlet of outrage — it should be more than just tough to shrug off celebrating grabbing women against their consent, banning people based on faith, referring to his missed STDs as his personal Vietnam, or mocking someone’s arthrogryposis. At times, he just seems unhinged.

Then there’s Trump flirtatious, at best, relationship with the truth. Surely there’s a degree to which everyone can hope the role of Presidency go to a man or woman with enough sense to differentiate between fact and conspiracy; Trump plays just as loose with one as the other to the point of even attacking our own intelligence agencies because they aren’t saying what he wants to hear.

It’s not about Trump representing a political extreme, it’s just about him seeming like, in his words, a “bad hombre.” His tweets alone since the election should give any rational American pause, if not lead to downright shame and fright.

Only 83 electoral votes in our nation’s history have been changed on account of personal initiative; it’s a tall order to suggest this figure will change much with the vote in state capitols around the nation. In any case, the points of consideration that the electors should examine are not about the stock market’s response or the deals that can be cut behind closed Beltway doors. Instead, the conversation should be about the country and some measure of the man himself.
—
J.D. Durkin (@jivedurkey) is an editorial producer and columnist at Mediaite.