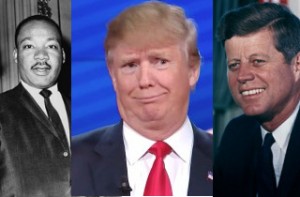 Alex Jones — the ne plus ultra of shock jock conspiracy mongering — has a theory that the nefarious “They” pulling the strings on any number of insidious plots might assassinate Donald Trump, just as they killed Martin Luther King, Bobby Kennedy, and John F. Kennedy before him.

Although Jones is a man who sees conspiracies in his alphabet soup, he has been curiously unbothered by Trump’s history as a registered Democrat, past coziness with the Clinton, and history of hobnobbing with political/media elites. In fact, he believes that Trump is the only man who can save America. Like Jones, Trump is “freaked out” that “they’re putting cancer viruses in the vaccines.” (The GOP frontrunner is a notorious anti-vaxxer.)

Jones devoted a segment of his InfoWars show Monday to explaining why his favorite candidate has a target on his back.

The whole elite is piling on against him. That’s why they’re doing everything they can to stop him. You think Trump’s stupid, folks? If he gets elected and doesn’t try to deliver, he will be the lowest-valued thing on earth, he will be the trash to be taken home. He’s not going to do that. And that’s why I think we’re going to see an epic battle now. They’re going to do anything they can to stop Donald Trump, folks, just like they stopped Martin Luther King or Bobby Kennedy and JFK.

Recall that Jones once dressed up as a clown to explain to viewers that an evil international cabal had launched an insidious plot involving Jerry Sandusky, transgender bathrooms, the Pope, the United Nations, “trendy” liberals, the welfare state, death panels, “torture and necrophilia dungeons” — all part of “an act of domination, an act of control” perpetrated by what he calls the “Pot Bellied Pedophile Network.” So, grain of salt and all that.