Pew: Black Turnout May Have Been Lower Because Blacks Lie, Or Higher Because So Many Are Felons

Pew: Black Turnout May Have Been Lower Because Blacks Lie, Or Higher Because So Many Are Felons 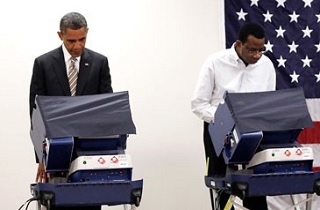 According to a new report by The Pew Research Center, that report might be incorrect, either because too many 2012 black voters lied about voting, meaning the black turnout rate actually didn’t surpass white turnout, or because the Census bureau’s 2008 report failed to exclude black felons, meaning that the black voter turnout rate actually surpassed the white turnout rate in 2008. A reading of their analysis makes you wonder why they bent over backwards to formulate either of these premises, neither of which is more compelling than the Census Bureau’s apples-to-apples reporting.

First, there’s the premise that the 2012 turnout rate was over-reported because black people lied. From Pew‘s Paul Taylor and Mark Hugo Lopez:

It’s based on data that suggest that last year, blacks may have been more inclined than whites to report that they voted when in fact they didn’t. This is known as a “social desirability bias,” a familiar concern among survey researchers.

The Census Bureau bases its estimates of voter turnout on self-reports from a survey of a nationally representative sample of about 55,000 households. The survey is conducted in the two weeks after each federal election and is considered the best source of information on the demographics of the nation’s electorate. However, this self-report method typically produces a modest over-estimate of turnout, and 2012 was no exception. According to the Census Bureau’s estimates, 133 million Americans voted last year, but according to the official state-by-state tallies, just 129 million did.

The report goes on to cite Pew statistics that show state-by-state discrepancies were higher in some states with heavy black populations, but not in others. Two of the ten blackest states actually under-reported overall voter turnout. To the extent that their data suggests anything, the authors ask “Might this be because non-voting blacks were more eager than non-voting whites to tell survey takers that they voted for the first ever African-American president? While there’s no way of knowing for sure, the data are suggestive.”

It’s also possible that lots of white people lied about voting for Barack Obama for the exact same reason, a phenomenon that I believe there’s a name for, rhymes with “Schmadley Schmeffect.” It’s also possible that lots of white racists wished they had voted against Obama, but couldn’t be moved off of their couches to do so. Pew acknowledges only the possibility that black people are the liars. Pew also disregards the possibility that more black votes were invalidated, or that a large portion of the overall discrepancy could be due to discarded votes.

That assessment is based an analysis that removes from the pool of eligible voters all adults who have been disenfranchised as a result of felony convictions, something the Census Bureau does not (and cannot) do. According to the Sentencing Project, an advocacy group, nearly 6 million adults are ineligible to vote for that reason, a disproportionate share of who are black. If you recalculate turnout rates after removing those disenfranchised voters, then 68.5% of eligible blacks voted in 2008, compared with 67% of eligible whites, according to Bernard L. Fraga, a political scientist studying at Harvard. The Census Bureau, by contrast, had 66.1% of whites voting that year, compared with 64.7% of blacks.

So pick your data source and write your own history.

Since the Census Bureau has used a consistent methodology to compile their data, without speculating on the relative honesty and/or feloniousness of black people, why don’t we just go with theirs?