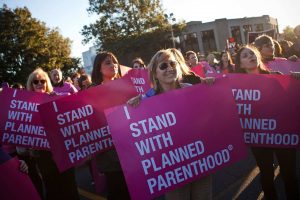 Planned Parenthood is a widely beloved organization among both women’s rights advocates and Democratic voters, and its often even defended by moderate Republicans like Maine Republican Sen. Susan Collins, who opposed the GOP health care bill largely because it would slash funding for the organization. But to many progressives, Planned Parenthood’s bipartisan appeal also sometimes yields disappointing decisions.

I’ve previously written about the inadvertently problematic nature of Planned Parenthood’s repeatedly stating only 3 percent of its services are abortion and that it receives no Medicaid reimbursements for abortion services — what these statements do is build on the stigma that abortion is already mired in, solely to pander to conservatives. Of course, Planned Parenthood is forced to walk on eggshells just to not be defunded, and it puts this funding to excellent use.

But as for Planned Parenthood disappointing members of its progressive base along the way — case in point: a controversial statement from the president of the organization’s California affiliates essentially saying now is not the time to fight for single-payer.

The press release came out on June 24, almost a month ago, but following the (at least temporary) defeat of the senate GOP health care bill, The Nation and Jacobin magazine journalist Alex Press took to Twitter to point out how opposition to universal health care is a failure for women’s rights.

“Right now, health care for millions of Americans is under attack. The bill the US Senate is considering is the worst policy change for women in a generation. In addition to “defunding” Planned Parenthood and slashing Medicaid, it guts maternity coverage and prescription drugs. Thirteen million women could lose coverage.

That’s why Planned Parenthood Affiliates of California supports Speaker Rendon’s focus on what’s at stake right now. As disappointed as many are, we know he made a hard decision to keep the pressure on defeating the GOP actions in Washington D.C. We pledge to continue to work with the Legislature and our partners to defeat Trumpcare. And we will work together to make sure our state’s health system provides quality, affordable access to care for all Californians.”

“PP coming out against single payer because it can’t fathom radical change is so damaging for women’s health and the feminist movement,” Press said in a Sunday tweet.

PP coming out against single payer because it can't fathom radical change is so damaging for women's health and the feminist movement pic.twitter.com/3jys4E7HyU

Press continued in a series of tweets:

“Any movement for single payer, at the state or federal level, needs to incorporate repealing the Hyde Amendment [a law barring federal funding from paying for abortion] into its demands. Instead of advocating for this, [Planned Parenthood] … continues ceding ground to the Right. When the grassroots feminist movement, which PP has to thank for its existence, articulated ‘free abortion on demand,’ it won real gains. Now, PP distances itself from these roots, grassroots feminists, and even from its role as an abortion provider! Which is why we’re losing.”

Press’s points were probably difficult for any Planned Parenthood supporter to read, but it’s so important they were shared. Single-payer health care would be to the benefit of women more than any demographic, especially in the face of GOP attacks that would essentially render being a woman a pre-existing condition.

Additionally, there’s no denying that Planned Parenthood has ceded crucial ground to conservative lawmakers, largely in their rhetoric. For example, instead of fighting the Hyde amendment, which prevents thousands of low-income women from being able to access safe and legal abortion, the organization routinely affirms the Hyde amendment’s legitimacy by reminding conservatives that they don’t use federal funding to pay for abortion.

Of course, it would be wrong to sweepingly blame this on Planned Parenthood for this messaging — conservative lawmakers have established a climate so hostile to reproductive rights that the organization has had to adapt just to survive. But that doesn’t make this criticism any less necessary, and being an organization grounded in feminist principles and constantly striving to be more inclusive, I don’t doubt this criticism will be appreciated by the organization’s leaders.

Still, at the end of the day, while many of the concessions Planned Parenthood has been making have seemed necessary, Press has a good point — in the past, the aggressive and unapologetic grassroots feminism won Planned Parenthood everything it has, today, has been successful. There’s no reason that it wouldn’t be just as successful in 2017.