Politico Reports Lobbyists Licking Their Chops Over A Romney Administration

Politico Reports Lobbyists Licking Their Chops Over A Romney Administration 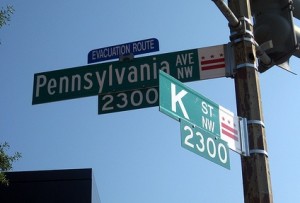 While President Obama has managed to maintain his support among a voting coalition comprised of many disparate groups, he has never quite been able to gain the support of the Lobbying Lobby. In a new report from Politico, the word on K Street is that, despite criticism of the true efficacy of President Obama’s anti-lobbyist rules, the lobbying community can’t wait to show him the door, and usher in a more lobbyist-friendly Mitt Romney administration. The Romney campaign, however, didn’t comment for the piece, and even blind-quoted “sources close” to the campaign didn’t have much to say.

“President Barack Obama’s gone further than any president to keep lobbyists out of the White House — even signing executive orders to do it,” the article begins, “But the mood on K Street is brightening. Industry insiders believe that Mitt Romney will unshackle the revolving door and give lobbyists a shot at the government jobs their Democratic counterparts have been denied for the past four years, a dozen Republican lobbyists said in conversations with POLITICO.”

As Politico trend pieces go, this one features a decent number of on-the-record quotes from lobbyists, most of which support the central theme that everyone pretty much assumes that a Romney administration will be more lobbyist-friendly than the Obama administration has been. The Romney campaign itself, however, isn’t talking:

Sources close to Romney’s campaign say there has been no official word from the campaign on what the rules about lobbyists in the administration will be. And Romney himself has said nothing definitive on the trail about the issue.

But there are clear signs that lobbyists could be back in the executive branch.

Some of the highest-level positions in a potential Romney administration are expected be filled by former lobbyists and Washington insiders. Health care consultant Mike Leavitt, who served as the head of the Environmental Protection Agency for Bush, is leading Romney’s transition effort. He’s considered a shoo-in for either White House chief of staff or Treasury Secretary. Campaign spokesman Kevin Madden, of JDAFrontline, is expected to get the job of White House spokesman.

Just because it’s based on assumptions, however, doesn’t mean they’re not fair assumptions. The general reaction to the Obama administration’s anti-lobbying efforts has been one of cynicism, and some of that criticism is valid, but the takeaway here is that the influence of lobbyists is so insidious, and so ingrained, that even supposedly cosmetic efforts to combat it are cause for significant angst on K Street.

It’s true that the Obama administration has bent its own lobbying rules (as the Politico piece point out), and kept its negotiations with the health care industry over the Affordable Care Act secret, which are legitimate disappointments, but as far as K Street is concerned, President Obama may as well be Eliot Ness to their Capone. During the 2008 Democratic primary, there was a palpable nervousness among even Democratic lobbyists that then-Sen. Obama didn’t “get it,” wasn’t prepared to play ball with the lobbies that brought him to the dance.

However you feel about President Obama’s anti-lobbying efforts, it’s worth noting that, given the opportunity, the Romney campaign has passed up the opportunity to say they’ll do anything to reduce the influence of lobbyists on their administration. That’s not a mixed signal, but a silence that should be crystal clear.