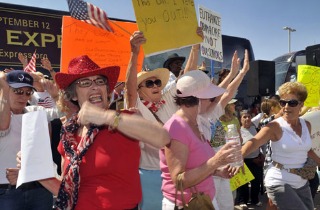 The conventional wisdom being bandied about in the press is that Republican office holders, reflecting the views of their constituents, are obstinate, uncompromising, and backward-thinking. A recent CBS News/New York Times poll found, however, that precisely the opposite is the case. On a range of issues, that survey found that partisan Republican voters are more willing to compromise a range of issues than their Democratic counterparts.

Slightly ironically, the poll also found that huge majorities of both Democrats (93 percent) and Republicans (76 percent) agreed that elected officials should “compromise some of their positions” in order to get things done in Washington. Based on the findings above, most were probably thinking that compromise should begin with the other guy.

Read the full poll results via the New York Times