Poll Shows Public Opinion Of Media At An All-Time Low, But Americans Still Trust The News 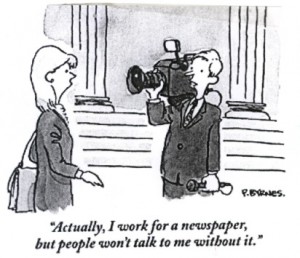 According to this year’s annual Pew Research Center poll surveying Americans’ thoughts on the media, people are more wary of our ilk than ever before. More people than ever consider the media — a nebulous force borne of the stairs, not unlike Cthulhu — to be “immoral,” “inaccurate,” and “biased.” When asked what people think when they hear “news organization,” most respondents replied with major cable news networks, mostly CNN and Fox News. A mere three percent thought of a website.

Americans are evenly split on whether the media works to “hurt democracy,” but a large majority are certain that the media often presents inaccurate information — 66 percent, in fact, compared to 34 percent when the survey debuted in 1985 — and 72 percent believe that reporters try to cover up their mistakes when they get something wrong. Only a quarter of respondents thought news outlets get their facts straight.

That said, 57 percent of respondents believe reporters are professional, and 68 percent think they care about the quality of their work.

In an age where news networks are increasingly open about subscribing to a certain ideology, 63 percent of respondents said that reporters are “politically biased in their reporting,” with only 25 percent believing otherwise. And, unsurprisingly, there’s this:

Perhaps oddly, even though many Americans profess to have negative opinions about news outlets in general, they are more inclined to believe the information they receive from local news sources. To wit:

Overall, self-identified Republicans were most trusting of local and national news organizations: