Polls: Shutdown Could Give Democrats House in 2014

Polls: Shutdown Could Give Democrats House in 2014 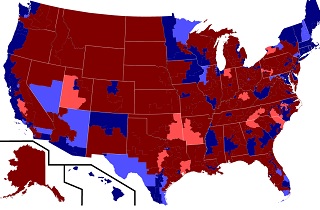 Although the mainstream media has done its level best to spread the wealth around, the current government shutdown appears to be taking an electorally deadly toll on House Republicans. According to a raft of new polls by Democratic-leaning (but dead-on accurate) Public Policy Polling, commissioned by MoveOn.org, there are at least 21 districts in which a Republican opponent polls behind a generic Democratic challenger, especially when asked about the shutdown and the debt ceiling.

Republicans seemed to have gerrymandered themselves into invincibility with their 2010 census year tidal wave, retaining their majority in 2012 despite losing the Congressional popular vote by nearly two million votes. However, PPP polled 24 congressional districts held by Republican incumbents, and found 21 districts in which a generic Democratic opponent now leads:

If the 2014 elections were held today, Republicans would be in grave danger of losing control of the House of Representatives, according to a series of 24 surveys conducted by Public Policy Polling in Republican-held House districts over the past few days. The surveys challenge the conventional wisdom that gerrymandering has put the House out of reach for Democrats.

These poll results make clear that if the election were held today, such a pickup would be well within reach.

Even in the three districts in which the Republican opponent still leads, the Democrats gain points after voters are told about the Republicans’ support for the government shutdown, and one of those incumbents holds only a three point lead.

Even if you feel like the shutdown question is a little too push-poll-ish, these results are hardly encouraging for the GOP. The initial responses likely already have reaction to the shutdown baked into them. In all but two of the districts polled, the Tea Party scored net unfavorable ratings of up to 26 points.

A year is an eternity in politics, especially in today’s microscopic news cycle, which means either that Republicans have a long time to undo the political damage that this fight has inflicted on them, or gives Democrats that much more time to capitalize on it.