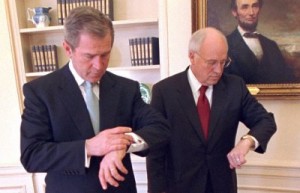 The Washington Post‘s Barton Gellman reports that Dick Cheney won’t hold back in his forthcoming $2 million memoir of his years in the Bush administration. DC powerhouse lawyer Robert Barnett, who negotiated Cheney’s book contract, told the Post that “‘the statute of limitations has expired’ on many of [Cheney’s] secrets.”

Among other things, Cheney was reportedly bitter that Bush didn’t pardon his Chief of Staff Lewis ‘Scooter’ Libby, who was convicted of perjury and obstruction of justice in Plamegate, despite the fact that another man, Richard Armitage, was the primary source of the leak.

What other revelations should we expect from the book? Mediaite has a few guesses: