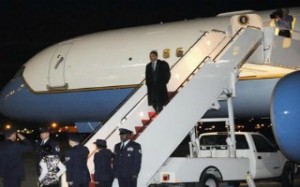 An earlier Mediaite post containing reports of the President’s surprise visit to Afghanistan was deleted out of an abundance of caution, when we learned that the NY Post had deleted their story, leaving the sourcing on the story rather thin. Other outlets are reporting they quashed stories based on security concerns.

The White House has released the following pool reports, confirming the President’s trip:

Andrews to Bagram Air Base to Kabul

President Barack Obama is in Afghanistan for a whirlwind visit that will culminate in a live, televised address to the American people.

Obama’s scheduled to speak to the nation just after 730 PM ET wednesday from Bagram airbase.

Pool, which assembled Monday night at Andrews, has been under an embargo preventing reporting of the trip up til now.

Obama left at 1209 AM Tuesday morning. And arrived at Bagram at 1020 pm local time. He landed via chopper at LZ near presidential palace at just after 11pm local

Amb Ryan crocker and Lieut Gen Mike Scaparotti deputy cddr us forces afghanistan greeted Obama as he deplaned from the lower stairs of AF1 at Bagram.

Obama is currently at the presidential palace in Kabul
A more detailed report should come shortly as communications permit.

Pool report no 2
One correction: speech to nation is at 730pm Tuesday eastern in the US, 4 AM wednesday here in Afghanistan.

President Barack Obama arrived in Afghanistan under cover of darkness Tuesday night for a whirlwind trip scheduled to culminate with a live, televised address to the American people delivered from Bagram Air Base outside the Afghan capital, Kabul.

Strict security measures are in place, including a White House imposed embargo that prevented journalists in the pool from reporting on Obama’s travel until he arrived at the Presidential Palace at about 11:30 PM local Tuesday night.

Obama and Afghan President Hamid Karzai are expected to sign a ten page strategic partnership agreement pledging US support for Afghanistan for a decade after 2014, when Nato forces are planning to conclude their combat role. The signing ceremony with the two presidents should paint a tableau of solidarity for an Afghan US relationship that has been stormy and at time fractious during the three years of Obama’s presidency.

Senior Administration officials said the unconventional timing of events on the trip, such as the scheduled midnight local time signing ceremony, was aimed at allowing Obama to address Americans on a schedule convenient for US television audiences. That speech, expected to run about 10 minutes, is scheduled to take place just after 730 pm ET tuesday, which is 4 AM here in Afghanistan.

Of course, the middle of the night schedule also provides the added security of darkness for the arrival and departure of AF1 and flights by helicopter from Bagram to and from a landing zone near the presidential palace. While US officials insist security has improved significantly since the US troop buildup Obama ordered at the end of 2009, there have beena series of troubling incidents in recent months including riots relating to the Qu’ran burning episode, Afghan on US troop violence, and a protracted gun and RPG battle in Kabul’s embassy district just over two weeks ago.

Pool report no 3
Presidential palace and prior, background
May 1-2, 2012

Karzai and Obama are expected to deliver statements at the Presidential Palace shortly. But there are no plans for a pool spray of their bilateral meeting or for the pair to field questions, WH officials said.

Senior administration officials said the timing of the trip was driven by the negotiations over the Strategic Partnership Agreement and by the desire of both presidents to sign the agreement in Afghanistan prior to the NATO summit in Chicago later this month. However, the officials also acknowledged that the timing coincides with the first anniversary of the US raid that killed Osama bin Laden.

Before delivering the address, Obama is expected to meet with and make a speech to US troops stationed at Bagram.