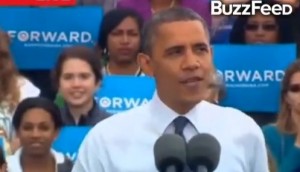 At a campaign speech in Fairfax, Virginia, President Obama set the social media on fire with a new catchphrase. Referencing former Massachusetts Governor Mitt Romney‘s most recent apparent whiplash back to the political center, which even has him campaigning on the issue of abortion rights, the President told the crowd that “Mr. Severely Conservative wants you to think he was severely kidding about everything he’s said over the last year,” and that Romney is  “changing up so much, we’ve gotta.. we’ve got to name this condition that he’s going through. I think it’s called ‘Romnesia,’” to roars of laughter from the crowd.

“I’m not a medical doctor,” the President continued, relishing the crowd reaction, “but I do want to go over some of the symptoms with you, because I want to make sure nobody else catches it.”

He went on to use the gag for several other recent Romney flips, such as his drastic reversal on contraception, his wild ricocheting on the issue of abortion rights, and his denials about the $5 trillion tax cut that is the centerpiece of his economic plan.

Here’s the video, via Buzzfeed: