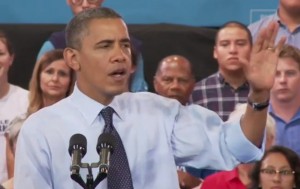 At a campaign event in Las Vegas Wednesday morning, President Obama delivered what could be the most important message of this year’s presidential election, a message that was ignored by far too many people during the 2010 midterm elections that swept a huge majority of Republicans into the House of Representatives. As he talked about the efforts of Republicans in Congress to block measures that would have put teachers, police, and firefighters back to work, lusty boos swelled from the crowd. “No, no, no, no, no,” the President said, “don’t boo. Vote!”

The line drew a laugh from the crowd, but the message is deadly serious. The Republican takeover in Congress (including the breaking of the Democrats’ filibuster-proof majority in the Senate) has enabled their bad-faith obstruction to hinder economic recovery, as starkly illustrated by the 600,000 public sector job losses that continue to be a drag on the economy. Mitt Romney is already on record supporting this trend (why hire a cop when you can just dress up like one?), while the American people are on record overwhelmingly not.

But if Americans overwhelmingly support hiring more police, firefighters, and teachers, how, exactly, did Republicans sweep into power in 2010? Were they promising to do those things, then pulling a double-cross once they got into office?

No, they rode an energized Tea Party wave of anti-Obama fervor, one which could not be matched by a fatigued middle and a piqued left. It’s fair to say that the folks who now complain about the Scott Walkers of the world got the government they deserved.

That energy on the right has not dissipated one iota, despite a less-than-thrilling nominee, and even as the left has become energized by things like the War on Women (playing out in epic fashion this week), they will be hard-pressed to match the wattage of the 2008 cycle.

Something else is different this time around, though. Republicans at the state level have instituted voter ID laws of varying strictness, laws which promise to disproportionately disenfranchise minority populations. In fact, one Republican legislator literally promised they would. While the disengaged voters who stayed home in 2010 deserved what they got, people who have followed the rules for years, even decades, whose only crime is not having the ID necessary to board an airplane, do not deserve the bit of dirty pool that has been played on them.

However, that’s where we are, and President Obama is right. If you’re mad about what’s happening in this country, don’t boo (or rather, don’t just boo), vote. That’s true of both sides, of course, but only one side is actively trying to prevent people from doing so.