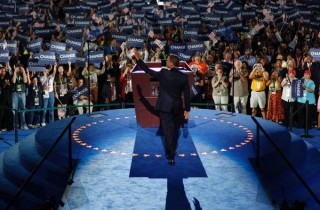 The Republican Party’s 2012 platform has been in the news lately for its inclusion of an ultra-conservative stance on abortion, and the party’s outright refusal to include a “civil unions” amendment despite being the party that supposedly respects “freedom” and “liberty.”

Party platforms are a funny thing, to say the least. Over at Reason, Matt Welch points out a particular passage of the Democratic Party’s 2008 platform.

Let’s take a fun little trip back to the George W. Bush era and remember when the Dems “stood” for the following:

…[W]e’ve seen an Administration put forward a false choice between the liberties we cherish and the security we demand. The Democratic Party rejects this dichotomy. We will restore our constitutional traditions, and recover our nation’s founding commitment to liberty under law.

We support constitutional protections and judicial oversight on any surveillance program involving Americans. We will review the current Administration’s warrantless wiretapping program. We reject illegal wiretapping of American citizens, wherever they live. We reject the use of national security letters to spy on citizens who are not suspected of a crime. We reject the tracking of citizens who do nothing more than protest a misguided war. We reject torture. We reject sweeping claims of “inherent” presidential power. We will revisit the Patriot Act and overturn unconstitutional executive decisions issued during the past eight years. We will not use signing statements to nullify or undermine duly enacted law. […]

We will not ship away prisoners in the dead of night to be tortured in far off countries, or detain without trial or charge prisoners who can and should be brought to justice for their crimes, or maintain a network of secret prisons to jail people beyond the reach of the law. We will respect the time-honored principle of habeas corpus, the seven century-old right of individuals to challenge the terms of their own detention that was recently reaffirmed by our Supreme Court. We will close the detention camp in Guantanamo Bay, the location of so many of the worst constitutional abuses in recent years. With these necessary changes, the attention of the world will be directed where it belongs: on what terrorists have done to us, not on how we treat suspects.

“…Unless there’s a Democrat in the White House.” That’s probably how that passage should have ended, because under President Barack Obama, that truly “false dichotomy” has largely continued.

“Judicial oversight” on surveillance programs? Obama signed an extension of the PATRIOT Act, which Sen. Patrick Leahy (D-VT) lamented “does not include a single improvement or reform, and includes not even a word that recognises the importance of protecting the civil liberties and constitutional privacy rights of Americans.”

The use of national security letters to spy on citizens? Yeah, still happening.

“We reject torture”? Errr…yeah, still happens. Weird to think this was once the party that claimed moral high ground on that.

“We will not ship away prisoners in the dead of night to be tortured in far off countries.” Oh, that? Yep. Still happens.

“We will close the detention camp in Guantanamo Bay.” Haha, not even going to touch that one.