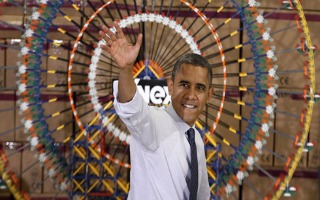 President Obama has been blasted by the GOP for his “campaign”-style approach to the fiscal cliff negotiations. He’s done everything from a Twitter town hall to a speaking engagement at a K’NEX factory, and he’s been criticized for both, with prominent Republicans telling him, “the election is over.”

The insults are all for nothing, though, because the president has the public on his side when it comes to the fiscal cliff negotiations. Are Republicans just angry because they know Obama’s “campaign” strategy is working?

A spokeswoman for House Speaker John Boehner has implied that Obama is accomplishing nothing in these public appearances, saying, “Every day spent campaigning rather than offering a solution is a day wasted and a day closer to the economy going over the cliff.”

But contrary to what the GOP would have us believe, Obama is, actually, offering solutions. He sent a proposal to House Republicans which was, disrespectfully, laughed out of the room. He has also met with Boehner and other House Republicans several times to avoid a dive over the fiscal cliff.

The GOP criticism is simply a desperate attempt to regain some control over negotiations that are slipping away from them. After all, Obama hasn’t been out on the “campaign” trail telling Americans to outrightly reject the Republican plan. He’s been out telling Americans the truth: without a workable deal in place, taxes for all income levels, including the middle class, will go up. Obama may be using calculated political moves to pass the deal he’s after, but the reality is, he’s also doing what every lawmaker, Republican or Democrat, ought to be doing: encouraging the American people to express their views on governmental policies that will affect them dramatically.

When Obama visits families, poses for photos, and releases videos of himself tweeting, he’s acknowledging that while he may be elected to the highest office in the nation, he’s not above asking for help. Even if just for political gain, the “campaign”-style events put him in touch with the middle class in a way that Republicans haven’t been. When Mitch McConnell criticizes him for not “turning off the campaign,” it doesn’t hurt the public perception of the president. In fact, I’d argue it helps: it makes him appear to be a caring leader, instead of another stodgy politician sitting on Capitol Hill thinking that no matter what, he knows best.

What’s ironic about the Republican opposition to Obama’s fiscal cliff “campaign” is that they’re guilty of using the same tactics, both now and in the past. The conservative group Crossroads GPS, backed by Karl Rove, just spent $500,000 on ads attacking Obama’s policy. The GOP also spent large sums of money earlier this year in an effort to defeat Obamacare. They created a hashtag, a Facebook page and even a YouTube video for their efforts.

Give it up, GOP. Criticizing the president for “campaign”-style events doesn’t endear you to your constituents: it makes you hypocritical and ineffective. Instead, try following Obama’s example and actually consider asking the American people what they want. It may be a novel idea, but politicians allowing the American people to be part of the discussion in the government just might be the “campaign” of the future.
—
>> Follow Anjali Sareen (@AnjaliSareen) On Twitter