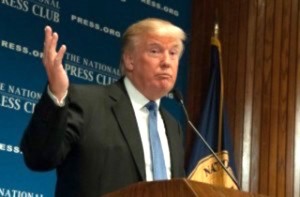 A group of rabbis are planning to boycott Donald Trump’s speech next Monday at the pro-Israel summit AIPAC (American Israel Public Affairs Committee).

Trump’s AIPAC speech was reportedly the prior commitment that he cited when explaining why he would be sitting out the GOP debate that had been scheduled that night, and which was subsequently cancelled.

About 40 rabbis are reported to be protesting Trump’s appearance, though the organizers said they did not know exactly how many would participate in the protest.

The concerns being expressed by many Jewish leaders go beyond Trump’s controversial pledge to be “neutral” during peace talks between Israel and the Palestinians — and extend to fears of Trump’s style and approach to power.

Some say they hear echoes of a painful past under fascism in Trump’s recent comments appearing to praise authoritarian figures such as Russian President Vladi­mir Putin and in the way that Trump stokes economic anger among his supporters. And they point to Trump’s call for a ban on Muslims entering the United States and his harsh rhetoric on illegal Mexican migrants as reminiscent of the anti-immigrant sentiment that greeted European Jews in generations past.

Trump has repeatedly hedged on the issue of the Israel-Palestine conflict, citing his prowess as a negotiator and likening any potential resolution in the region to a real estate deal.