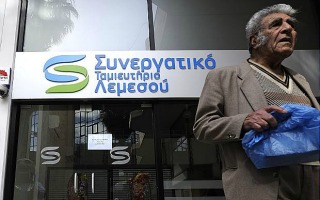 Over the weekend, the citizens of Cyprus discovered that help was on the way as their debt-laden island nation learned that the European Union and the International Monetary Fund had agreed to provide Cyprus with $13 billion in bank bailouts. But there was a catch: no longer were these funds going to be pain-free. Average Cypriots would have to pony up as well. 6.75 percent of all deposits in Cyprus-based banks below 100,000 Euros would be reclaimed by the government. Depositors with over 100,000 Euros would have to surrender 9.9 percent of their savings. The news spread like wildfire. The citizens of the Mediterranean nation took to the streets. They raided their bank accounts. President Nicos Anastassiades took to the televisions cameras as panic spread. The banks were closed. A vote on the deal postponed. The governments of creditor nations across the planet held emergency meetings in the fear that the crisis in Cyprus could spread beyond the nation’s watery borders. Today, residents of the Eurozone watch the smoldering scene in Cyprus for materializing fallout. The debt crisis had arrived in Europe. No longer is this theoretical of hypothetical; this is what a debt crisis looks like.

RELATED: Paul Ryan Tells CBS’ Bob Schieffer ‘We Do Not Have A Debt Crisis’

The panic that resulted from the proposed $13 billion bailout deal has scuttled the plan in its present form. There are nearly 70 billion Euros in Cypriot banks from outside the country. The Russian government in particular is expressing their revulsion over the bailout plan, given that Russian banks and corporations have more than $31 billion in Cyprus-based banks. A spokesperson for the Russian government made it clear, however, that a deal that bails out the island nation and levies only the funds of native Cypriots would not be opposed by Moscow.

And a deal will be made. Anastasiades warned that, if a bailout deal was not reached, “a complete collapse of the banking sector” was imminent. He promised that, over the next two years, average citizens who choose to keep their savings in Cypriot banks will be the beneficiaries of government-backed bonds linked to the exploitation of recently discovered oil and gas deposits of the nation’s coast. This is cold comfort for those citizens about to lose up to 10 percent of their entire savings through no fault of their own.

Meanwhile, in the United States, American politicians on the right and the left are conceding that the globe’s lone superpower does not face an immediate debt crisis.

“America is still a step ahead of the European nations that are confronting a debt crisis — of Japan that is in its second lost decade — it’s partly because of our resilient economy, because of our world currency status,” said Rep. Paul Ryan (R-WI), chairman of the House Budget Committee on Sunday. “So, we do not have a debt crisis right now but we see it coming. We know it’s irrefutably happening and the point we’re trying to make with our budget is let’s get ahead of this problem.”

“We do not have an immediate debt crisis, but we all know that we have one looming,” House Speaker John Boehner (R-OH), speaking about the looming debt crisis with ABC News’ Martha Raddatz, agreed. “And we have one looming because we have entitlement programs that are not sustainable in their current form. They’re going to go bankrupt.”

The two prominent House Republicans echoed a sentiment expressed by President Barack Obama last week when he informed George Stephanopoulos that, “we don’t have an immediate crisis in terms of debt.”

“In fact, for the next 10 years, it’s gonna be in a sustainable place,” Obama added.

In economic terms, the president and the House GOP leadership are correct: an immediate debt crisis is not going to erupt tomorrow, but a crisis is visible on the horizon. Furthermore, in a political context, the nightmare in Cyprus has added a real-world dimension to what a debt crisis looks like and how it can ultimately affect the lives of average citizens.

Republicans will be accused by Democrats of fear-mongering if they caution that the reality in Cyprus could one day be faced by Americans. The GOP will be tarred by advocates of debt accumulation of not drawing enough distinctions between the circumstances faced by Europe’s worst debtor nations and those faced by the U.S. Let them. The stark reality of the debt crisis in Europe will focus the minds of American taxpayers.

No other issue resonates as profoundly as the sanctity of private property rights and the indiscriminate way in which they can be violated by sovereign governments on a whim. Wedge issues like the debate over marriage equality, immigration reforms consisting of a pathway to citizenship or easier access to work visas, abortion rights and access to birth control – all will fall by the wayside as the nation’s income earners focus myopically on their balance books.

Democrats will further risk alienating taxpayers if they dismiss their fears about manifest debt crisis in America as being unwarranted. The Cyprus’ example is tangible now, and it is terrifying. Public anxiety about the nature of the problem a mounting debt poses will strengthen the hand Republicans hold in negotiations with the president.

Conservatives who seek to educate the nation on the horrors of an out of control debt that can no longer be serviced have a powerful new tool.