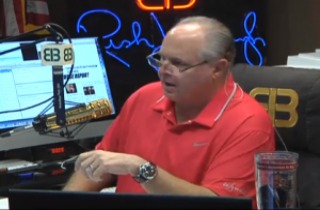 Conservative radio host Rush Limbaugh told his audience on Thursday that some are becoming concerned about the president’s mental health. Limbaugh said that President Barack Obama declaring the use of chemical weapons in Syria a “red line” and then shifting that declaration to Congress and the international community once it was crossed is “psychopathic.”

Limbaugh played a clip of the president in Sweden on Wednesday telling reporters that the world and Congress set the “red line” prohibiting the use of chemical weapons in Syria and he only referenced it in the summer of 2012.

“This is some-pathic, I don’t know what kind,” Limbaugh said. “Psychopathic, it’s some pathic.”

“It’s Congress’ fault, because they’re the ones that passed a resolution decades ago against the use of chemical weapons,” he added. “Oh yeah, it’s the Republicans fault.”

RELATED: This Is the Cover of Rush Limbaugh’s New Children’s Book

“There are people watching this and I’m telling you they’re questioning the stability of the people running this country and they’re scared to death,” Limbaugh asserted.

Limbaugh said that the country is better off if it does not intervene in the Syrian civil war and accept the lost credibility that will result when nothing comes of Obama’s forceful declarations about the need to act.

“This is dangerous,” Limbaugh added. “It’s not Obama cleverly outwitting his opponents. He’s President of the United States and he’s not up to it.”

“He doesn’t want the job,” he insisted. “He’ll be glad to raise your taxes and control your life with health care, but he doesn’t want to do this stuff. It’s too messy.”

“It is his credibility on the line and there’s nothing he can do about that,” Limbaugh continued. “Can you imagine any president ever say, ‘it’s not my problem, it’s America’s problem.”

“Who the hell says that? Who – what kind of person thinks that?” the radio hosts went on.