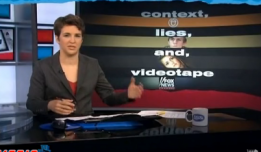 Rachel Maddow may well on her way to establishing herself as the preeminent mainstream media watchdog after last night. Her calm, thorough, twelve minute evisceration (sorry Jon Stewart, but it was) of the ACORN scandal was a far more damning commentary on the laziness and gullibility of the media and the questionable intentions of Fox News in general than it was an expose of how James O’Keefe et al. faked much of their now infamous report with “highly selective editing of reality.”

Using last week’s California attorney general’s report on the ACORN tapes as well as the unedited video Maddow compares the news that was reported, primarily on Fox, but eventually elsewhere also, with what actually happened. Needless to say you could drive a Mack truck through the two. For example the ACORN employee accused by O’Keefe and Giles (and “evidenced” by the edited tapes) of advising them on how to smuggle prostitutes into the country, actually immediately called the police once the two had left the office. Side note: Tommy Christopher notes a timeline discrepancy between the attorney general’s report, which says the employee called the police immediately and the the AP’s report last fall which said he waited two days…either way he was fired. Additionally, the ACORN employee who was apparently encouraging Giles to start a prostitution business? Turns out she was encouraging Giles not to give up looking for financing for housing.

Maddow, who doesn’t let ACORN off the hook for its other legal misdemeanors, reserves her most damning commentary for Fox:

I know it must shock you but it turns out Fox News was not giving its viewers an accurate portrayal of exactly how these two activists portrayed themselves when they went into the ACORN office…the huge tide of negative publicity that followed these tapes and the coverage they got on Fox, wall-to-wall for months, was bull-pucky. It was a dishonest political stunt that bears no resemblance to journalism and no resemblance to the actual facts of what happened in those offices.

But it worked, Maddow points out. “Means be damned, it worked…who do you think is next on their list?” Video below. Side note again: Interestingly, Maddow didn’t once mention Andrew Breitbart, which did not in any way keep him from furiously Twittering and RT-ing all comers following the show.