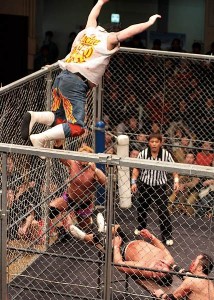 Yesterday, we wrote about the battle of words between Newser’s Michael Wolff and The Wrap’s Sharon Waxman, the ethics of news aggregation, and what constitutes stealing. But shouldn’t a debate about new media like this really be waged in a more modern way than Waxman’s and Wolff’s long (and abridged) columns? This is perhaps why four journalists took to Twitter to battle it out with brutal 140-character punches.

Unfortunately, you can only enjoy the action if you follow all four on Twitter and knew to be linking back and forth between them. That is…unless someone went to the trouble of collecting the whole argument. Wait, someone did? That someone was us?! Perfect!

Below you’ll find every Tweet in chronological order (with links to where they were originally posted) set up in a kind of script fashion. With all the “@” symbols and abbreviated grammar, it would probably sound out loud like a weird, German futurist play, but it’s definitely entertaining to read. Enjoy!

The combatants: Nicholas Carlson of Business Insider, Peter Kafka of All Things Digital, Felix Salmon of Reuters, (a brief cameo by Matthew Ingram of GigaOm ) and our own contributor Anthony De Rosa who started things off:

antderosa: I’m thinking about building a mirror of The Business Insider and Newser and running my own ads on it.

pkafka: heh RT @antderosa: I’m thinking about building a mirror of The Business Insider and Newser and running my own ads on it.

matthewi: RT @antderosa: I’m thinking about building a mirror of The Business Insider and Newser and running my own ads on it.

mattewi: @nichcarlson @antederosa @pkafka: it’s not the linking that’s the problem, Nich — but I suspect you probably already know that :-)

nichcarlson: @mathewi @antderosa @pkafka We pay a VP to beg people to copy & paste our entire articles onto their sites (so long as they keep the links)

nichcarlson: @antderosa You should totally talk to our bizdev VP, email me at nicholas at businessinsider.com and I’ll intro

antderosa: @nichcarlson I’m aware of your syndication deal with Gawker, but what about other sources where you post several grafs of outside articles?

antderosa: @felixsalmon @nichcarlson @[email protected] That’s like 130 words from the article, why would anyone bother reading the rest at Reuters?

felixsalmon: @nichcarlson around “Felix Salmon dug through the lawsuit”, perhaps, or at the very least “Here’s Felix”: *Where’s* Felix?

nichcarlson: (after editing article to make the link to Reuters on the bottom enormous) @felixsalmon Better?

nichcarlson: (in response to “so we have your blessing, I assume?”) @antderosa Feel free to take my stories, so long as you keep all the links. Yes.

antderosa: @nichcarlson Why would anyone need to go to your site if I post the entire article? There’s no reason to click the links.

nichcarlson: @antderosa Clearly you do not spend all day obsessing over referrer links like I do. I THRILL when HuffPo tech takes one of our articles.

antderosa: @nichcarlson If I have some kind of agreement in place, sure. If you take several grafs or the entire article, you bet the author is pissed.

antderosa: @nichcarlson Yeah, but you guys have an agreement in place. Do you have that with everyone you copy from?

nichcarlson: @antderosa Only if that author’s job in no way depends on attracting new readers to his site.

antderosa: @nichcarlson But that should be up to the author to decide, not for someone to rip off their content without permission.

nichcarlson: @antderosa My rule is do unto others as you would have them do unto you. But obviously, if someone emails to say: STOP LINKING, we stop

nichcarlson: @antderosa Usually, the author’s boss (or publisher, or bizdev rep) will stop the author from asking us those things. Because its dumb

antderosa: @nichcarlson You don’t get it though, you steal it first and then tell them they’re stupid for not wanting you to steal it.

antderosa: @nichcarlson Do you request permission from everyone you post entire articles or several grafs from?

antderosa: @nichcarlson The two Reuters grafs you reprinted was nearly 130 words. Seems a bit excessive, no? Why not just intro it and link over?

nichcarlson: @antderosa It’s just my humble opinion, but I think a better thing to get ranty about is: Why don’t tech blogs link to each other any more?

antderosa: @nichcarlson I agree, they should. I’m a big advocate of link love. I think we just disagree on how.

Well, that’s the last of it so far. A lot of interesting points are made and it seems like people agree to disagree at the end. You should probably follow all these guys on Twitter since they’re all a fun read and you never know when Round 2 might start up!