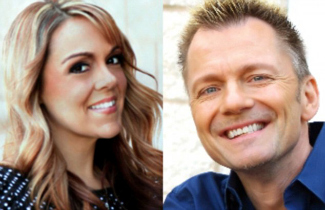 As if we needed another reminder that everything you read on the internet is fake, a homophobic RSVP to a children’s birthday party invitation that went viral last week has been revealed as a hoax.

Originally reported on-air and shared on Long Island radio station WKYJ’s Facebook page by hosts Leeana Karlson and Steve Harper, the extremely offensive “RSVP” to a young girl’s birthday party thrown by her two gay fathers was a perfectly-honed formula for stoking the flames of the internet’s omnivorous outrage machine.

Although anyone who saw the note should’ve been able to tell it was fake right away — after all, what kind of self-respecting gay men want to dress their children in tie dye?

“Tommy will NOT attend,” the note read. “I do not believe in what you do and will not subject my innocent son to your ‘lifestyle.’ I’m sorry Sophia has to grow up this way. If you have an issue or need to speak to me.” See below: 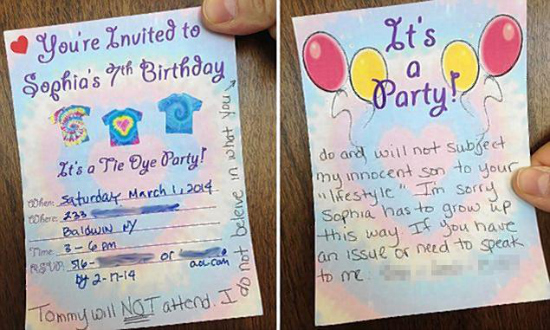 While it doesn’t sound like Sophia is the one with the issues here, we’re sorry she has to grow up this way too, living as she does in the imaginary kingdom of make believe virality, where the schools reportedly aren’t very good and there’s no Chuck E. Cheese’s.

Under pressure from the station management, the DJ duo issued an apology over the weekend and admitted that it was all a gag:

On Wednesday, we told you the story of Sophia’s birthday party, and one parent’s objection to the same-sex household of Sophia’s parents. We also posted the invitation on our Facebook page, and invited comments from our followers.

This story was, in fact, totally fictitious, and created by the two of us. This was done without the knowledge of K-98.3 management or ownership.

We were attempting to spur a healthy discourse on a highly passionate topic, but we made a mistake by misleading our listeners into thinking that this specific situation actually existed.

We are very sorry that we perpetuated this falsehood, even after it was clear that it had taken on a ‘life of its own.’ We deeply apologize for violating your trust, and we will work hard to regain that trust.

The station has posted an apology and retraction on their Facebook page as well.

One has to applaud the duo for trying to instigate a conversation about an important subject, but let’s all just be thankful we live in such a perfect world where there are no actual instances of homophobia going on right now in America, and that we’re forced to invent them in order to get the discussion started.