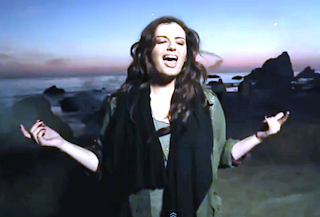 It’s been almost three years since an unknown 13-year-old girl named Rebecca Black convinced her mother to pay $4,000 for the production of a song and music video called “Friday” that, because it was just that terrible, took the internet by storm and became one of the most popular YouTube videos of all time. Today, she dropped her brand new song and music video into the world, and appropriately enough, it’s called “Saturday.”

A collaboration with fellow YouTube star Dave Days, “Saturday” isn’t drawing quite as much venom from the internet as “Friday” did, but then again, that’s not saying much. Early YouTube comments include “This is awesome. Beautiful. Way better than Friday. ;)﻿” and “LOL Saturday?”

The video is somewhat bigger in scope than “Friday,” with scenes on the beach and at a raucous hose party that lets the world know Black is a wilder teenager than the one who drove to school with her friends in 2011. She even throws in the line “Trying to get Friday out of my head” to make sure you know she’s sick of her original hit as well.

When “Friday” was first released, it drew the ire of Fox’s Bill O’Reilly and was celebrated by Jimmy Fallon and Stephen Colbert. While “Saturday” is certainly no musical masterpiece, it doesn’t come anywhere close to reaching the depths of Black’s debut. Will the new song have a similar cultural impact, or is it — gulp — too good to go viral?