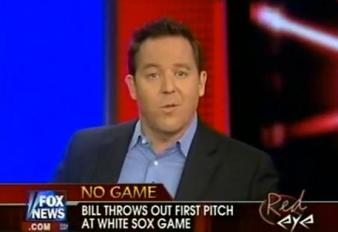 Fox News’ 3amET comedy/news hybrid Red Eye is in a league of its own when it comes to cable news shows. But that doesn’t mean it isn’t a player in the ratings.

Despite its late (or early, depending on your sleep habits) start time, the ratings for the show continue to improve, and surprisingly, top some cable news competition you might not expect.

Last week we were forwarded this message board post on ActivityPit.com – Red Eye‘s online community that feeds its dedicated base of fans. Here’s a part:

The ratings came out for September and Red Eye is up over 30% in total viewers and up 50% in the key demo (25-54) since July. They have more overall viewers than every CNBC show, every MSNBC show that is on before Hardball, most of HLN, and American Morning on CNN.

The show is looking up year-to-year as well. Compared to September 2008, the program grew 23% in total viewers and 43% in the A25-54 demographic. But let’s look at the individual shows. Last week we wrote about the 13 shows at the top of the ratings in September – all on Fox News. Red Eye, naturally, wasn’t one of them. Here’s where they fell – this is the full chart for September programs.

Red Eye averaged 432,000 total viewers and 202,000 in the demo. Let’s deal with the demo first – CNN’s 8pmET show, hosted by Campbell Brown, averaged 191,000 in the demo. Let’s just let that one sink in – Fox News had more people in the all important A25-54 demographic watching their channel at three in the morning (east coast time) than CNN had for the show that leads off their prime time. This says as much about Fox News as it does about CNN. Wow.

Part of the credit for this can be attributed to Red Eye, which has been consistently growing since its debut in 2007 and built up a solid following. Host Greg Gutfeld and regulars Bill Schulz and Andy Levy have been effective in connecting with their viewers through new media and other means. Some credit goes to Glenn Beck, whose repeat at 2amET was added a few months ago, providing a nice lead-in for the show. But in general, this shows not only the continued and expanding dominance of Fox News, but a major boost for the program some people thought wouldn’t survive.

It has, and continues to defy the odds, pulling in strong ratings, big guests and interesting segments at an hour normally reserved for re-runs and infomercials.

Here’s a look at some recent segments on Red Eye: