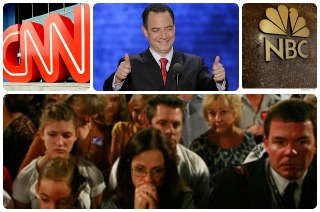 On Monday morning, a Republican National Committee spokeswoman revealed that a major announcement was coming about the future of the Republican presidential primary process. In that moment, full of promise, the future of the Republican Party looked bright. Perhaps the GOP had finally gotten serious about the profoundly broken methods by which it selects its nominee to become the most powerful person on the planet. But that hopeful moment was only a mirage. Republican National Committee Chairman Reince Priebus declared later that day that his announcement was merely a public relations ploy aimed at antagonizing an old foe – the national political media – and reinvigorating the GOP base’s fading sense of purpose. The RNC has a problem, but it is not NBC or CNN.

The great offense which CNN and NBC have committed against the Republican Party, which Priebus opted to preemptively identify as a threat to the media’s ability to cover the next presidential contest objectively, are planned docudramas about the life of Hillary Clinton.

Priebus apparently presumed that Clinton, the Democratic Party’s likely standard-bearer in a post-Barack Obama era, would be treated to a gauzy dramatization of her struggles with the effect of increasing her stature among voters.

NBC’s Clinton miniseries and CNN’s feature-length film about Clinton’s life, neither of which have even been filmed yet, would, in Priebus’ estimation, represent an “in-kind donation.” The GOP’s ultimatum also took note of the fact that Comcast employees – NBC’s parent company – have raised millions for and donated almost exclusively to Democratic political candidates. The conflict of interest is clear.

There are a number of pitfalls associated with issuing an ultimatum. Most notably, as Mediaite’s Josh Feldman identified, the failure to follow through with a threat once it has been issued will mean that future bluffs are less likely to be taken seriously. NBC and CNN both have called Priebus’ bluff. It’s his move.

RELATED: RNC Warning to CNN And NBC Over Hillary Clinton Films Sounds A Lot Like An Empty Threat

But there is a larger problem with Priebus’ gambit. The Republican primary process is deeply flawed, but the party’s chairman doesn’t seem to see that. Priebus’ dissociation, in the same way that the lessons of his post-2012 autopsy were never internalized, is ultimately detrimental to the future of the party.

Writing in National Affairs in their summer issue, The Weekly Standard’s Jay Cost and Jeffrey H. Anderson detailed a way in which the GOP could unilaterally implement sweeping reforms to the nomination procedure which simultaneously reduce the influence that big-dollar donors and the media have on the process.

Without summarizing their thoughtful proposition in an oversimplified way (anyone with a genuine interest in the American political process should read the proposal in full), the general gist is a dramatic shortening and condensing of the primary calendar punctuated by a handful of debates (as well as a variety of reforms to the process of selecting candidates). Given the truncated calendar, the reduced costs of the nomination process could be shouldered exclusively by the party and its donors – thereby eliminating the media from the equation almost entirely.

“Just as money would no longer hold such extraordinary power over the nomination process, neither would the press corps,” Cost and Anderson wrote. “Because every Republican from coast to coast would be invited to cast a ballot within a five-week span, there would be mercifully little opportunity for assignments of ‘momentum’ to hold sway.”

“Moreover, because the party would sponsor these debates, it could pick responsible moderators rather than media figures looking to generate controversy,” they continue.

The authors acknowledge that theirs is an ambitious proposal, but these are auspicious times which call for dramatic reforms – rebuilding years always are. The Republican Party can, like the Democrats did in the reforms of their nominating process early 1970s – reforms which the GOP also adopted – can lead the way in reining in the out-of-control spectacle that presidential elections have become.

While the Cost/Anderson proposal is a good one, it is just one of several. Priebus and his committee could have announced any number of reforms which accomplish his stated objective of ensuring the press neutrally covers the next presidential election. Instead, he embraced a transparent stratagem designed to generate maximum media attention. He will get it, but it’s not the kind of attention that does his party any good.