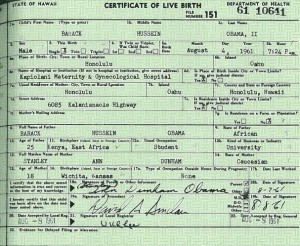 How stupid was it to release President Obama‘s long-form birth certificate? Let me count the ways. As Dan Pfeiffer said, the Birther issue was “good politics and good TV,” but I strongly disagree that it was “bad for the American people,” especially from Barack Obama’s point of view. His decision to cash in the Birther chips is an awful decision for them, unless he believes the country would be better off without him as president in 2013, .

As a writer for a media criticism website, the apparent death of the Birther story as a mainstream news meme is beyond tragic. Covering the media’s coverage of Donald Trump‘s Birther and Bailey Circus has been like shooting arthritic fish in a barrel with a shotgun.

With any luck, Trump will stick around the Teevee, and the top of Republican primary polls, with a steady regurgitation of other chain emails, crazy talk, and just plain dickishness, but this definite’y puts a crimp in The Donald’s media mojo.

The American people have been well-served by this Birther story, for precisely the reasons President Obama gave to end it. While it did give rise to an absurdly popular Donald Trump candidacy, it also revealed to Americans the unserious nature of an absurdly large number of Republicans. This issue promised to be a crucible against which GOP candidates (as they eventually declared) could be judged sane or not.

Obviously, this also illustrates the huge political advantage that President Obama has given away. The Birther issue is a loser for the GOP in a general election, but hugely influential in a Republican primary. Making every GOP candidate kiss the Birther Blarney Stone would have been an anchor around their necks.

The beauty part of it all is that the President was completely untouchable on this issue. He not only lacked the legal ability to release the long form on his own, but he had absolute moral authority never to do so. But like a child being taunted to prove he likes girls, Obama kissed one, only to have them all say “Ewwww! He kissed a girl!!” This hasn’t ended the Birther movement, or its influence on the Republican base, but has only driven it underground, where it cannot help Obama at all.

Since any possible political advantage to releasing this now would be multiplied by waiting, I can only conclude that President Obama is actually doing this to “take the high road.”

This is an idea guaranteed to give any liberal a case of head-explode-itis, given that every Democratic loser in popular memory has similarly relied on their “rightness,” and the party’s biggest winner was a guy who carried on at the White House like Fredo from The Godfather.

But even notwithstanding the fact that the High Road terminates in Loserville Junction, Obama was already taking the high road! By facilitating the release of the long-form birth certificate, President Obama instantly betrayed every principle that his supporters have used to defend him, and in the process, undercut any future principled refusals to be treated unequally, unfairly, and untruthfully. Obama was asked, without just cause, to show his papers, and he did.

He also invited future candidates, himself included, to have unreasonable demands placed upon them, and created a burden on them to comply if the glare becomes bright enough.

Finally, Obama also comes out of this looking like Donald Trump took his lunch money, high ground or not. Obama would have been better served, and completely justified, in responding to Trump, et al, with a Parkway Salute. In capitulating to Trump, President Obama sent the message that bullying works.

There were people of every political stripe who found the Birther movement distasteful, and its very premise un-American. In releasing this document, President Obama has let all of them down.