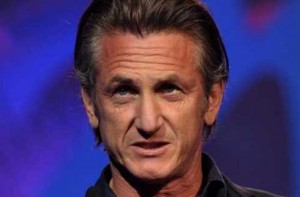 Actor Sean Penn likes to call himself a journalist. In his most recent interview with CBS’s 60 Minutes, he went even further and called out the state of journalism in the United States.

I’m really sad about the state of journalism in our country. It has been an incredible hypocrisy and an incredible lesson in just how much they don’t know and how disserved we are. You know, the– of course I know that there are people who don’t like me out of the gate, whether it’s political or… Again, journalists who want to say that I’m not a journalist. Well, I want to see the license that says that they’re a journalist.

But it’s a little irksome for this reporter to hear Penn sanctimoniously lecturing actual journalist Charlie Rose about the meaning of journalism, given that he once unironically argued journalists should be thrown in prison for reporting facts he didn’t like.

The context was that the actor had just come back from giving a glowing interview of Venezuelan President Hugo Chavez in 2010. Speaking on HBO’s Real Time with Bill Maher, Penn angrily denounced the U.S. media for calling Chavez a dictator.

“Every day, this elected leader is called a dictator here, and we just accept it, and accept it,” he complained. “And this is mainstream media. There should be a bar by which one goes to prison for these kinds of lies.”

Penn’s comments showed a contempt for the freedom of the press foreign to American sensibilities. Calling someone a “dictator” in the United States is by law protected speech. Americans call Barack Obama a dictator everyday and did the same for George W. Bush when he was in office based on vague definitions of what makes a “dictator.” By Penn’s standards, voicing those opinions in a public forum would earn you a prison sentence, because they don’t abide by his definition of dictatorship.

There are also about a thousand more reasons to call Chavez a dictator than there ever was for Bush or Obama. Although Chavez did win elections, his administration was marked by a complete degradation of human rights and a consolidation of power. Under Chavez’s reign, Freedom House rankings of Venezuela bumped down from “Free” to “Partly Free,” as Chavez eroded Venezuela’s system of checks and balances and shredded the autonomy of the courts.

When he died of cancer in 2013, Human Rights Watch even went out of its way to denounce his reign in a release entitled “Venezuela: Chávez’s Authoritarian Legacy“: “By his second full term in office, the concentration of power and erosion of human rights protections had given the government free rein to intimidate, censor, and prosecute Venezuelans who criticized the president or thwarted his political agenda.”

Penn’s comments may have been offensive to American notions of press freedom, but as it happens, Chavez agreed with him. During his time in office, freedom of the press suffered the greatest blow as he shut down, jailed, and intimidated critical journalism. By the time Penn was defending Chavez, Freedom House had already ruled that Venezuela was “Not Free” when it came to the press.

Penn has something of a history of sucking up to censorious slimeballs. In 2008, he wrote a simpering profile of Raul Castro. Sure, he admits, Cuba is a wasteland of press freedom where he would be thrown in prison for criticizing the government. But he assuages his guilt by telling himself  “that in a free and open election in Cuba today, the ruling Communist Party would win 80 percent of the electorate.” Oh, well that makes it all okay.

Then there was Penn’s meeting with one of Saddam Hussein’s closest advisors just before the Iraq War. Again, Hussein completely banned all non-state operated news services. And there’s a very, very good chance that Penn’s most recent interviewee El Chapo has ordered the death of a journalist from time to time.

After all that, Penn says he’s upset about the state of journalism in our country?

This isn’t even getting into Penn’s multiple arrests for assaulting news photographers. For someone who issued a strong defense in favor of citizen journalists and unorthodox methods of journalism, he sure doesn’t like when freelance paparazzi engage in perfectly legal journalism.

Penn was right, by the way, to insist that journalists don’t need a degree, a sponsoring organization, a press pass, or anything at all. Citizen journalists deserve all the press protections that mainstream journalists do. That’s why it’s so distressing to see Congress crafting press shield laws that only protect a narrow class of established reporters and throw independent journalists and bloggers to the wolves.

But Sean Penn is not a journalist; he’s an anti-journalist. He has spent his entire career physically assaulting journalists, advocating for the imprisonment of journalists, and cozying up to despots who dismantled, jailed, and murdered journalists.

What Sean Penn is is an activist for a radical political ideology. At times, pretending to do journalism furthers that goal. But when silencing journalists or ignoring their plight furthers that goal, he’s more than happy to do that as well. He’s only a true believer in journalism to the extent that his pal Chavez was a believer in democracy: willing to embrace it as a means to an end, but willing to disregard it when inconvenient.

Or to use another analogy, Sean Penn treats journalism the way some people treat their wives. We all love our spouses when we agree. But when we disagree, some people hit their wives with baseball bats or tie them to a chair, gag them, and torture them for hours.

I don’t know why that analogy came to me just now. Obviously, it does not apply to Sean Penn.