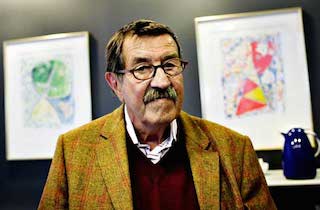 Günter Grass, whose 1959 novel The Tin Drum became one of the major works of postwar German literature, died at the age of 87. Per the New York Times Grass died at the clinic where he’s lived for years; no cause of death was given.

The Tin Drum, an “odd, profound, sprawling, poetic, often unnerving” novel of a boy in wartime Germany who refuses to age, is considered one of the masterpieces of twentieth century literature and established Grass as his nation’s “conscience” following the paroxysms of World War Two. When awarding him the Nobel Prize for literature in 1999 the committee praised his work as a rebirth of German literature “after decades of linguistic and moral destruction.”

However, Grass, always a controversial figure in Germany and abroad, severely roiled his reputation when he revealed in a 2006 memoir that he had served in the Nazi military in the waning days of the war. Grass had hidden his teenage service in Waffen SS for his entire career, including from the Nobel committee, and the revelation induced accusations of dishonesty and betrayal, even as many defended Grass. He wrote of the experience in The New Yorker:

So there were plenty of excuses. Yet for decades I refused to admit to the word, to the double letters. What I accepted with the stupid pride of youth I wanted to conceal after the war out of a recurrent sense of shame. But the burden remained, and no one could alleviate it.

Grass also argued against German reunification and in recent years criticized Israel over its aggression toward Iran.