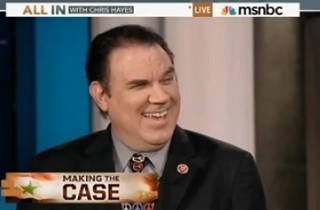 The debate over military action in Syria has produced a landfill’s worth of stupidity, from every side of the debate, and every corner of the political media. This is somewhat predictable, as we all know what opinions are like, but on Thursday night’s All In with Chris Hayes, “Congressman with Guts™” Alan Grayson (D-FL) made a bold incursion, from stupid into contemptible.

Following his excellent interview with Secretary of State John Kerry, host Chris Hayes continued the media’s current pastime of coaxing valueless opinions out of unqualified guests by interviewing Rep. Alan Grayson, who opposes the proposed military intervention in Syria. There are legitimate reasons to oppose the strike, as well as to support it, but Grayson’s performance here was a very extreme example of what has been so wrong with much of the media’s treatment of the Syria debate: a complete lack of seriousness or humility. If you’d like to see an example of seriousness and humility, check out the first half of this Chris Hayes commentary from Wednesday night, then slam your head on your desk.

You can watch the full Grayson segment here, but I don’t have the time or the inclination to pick it all apart. It’s chock full of genius. I just want you to watch what has to be the most ridiculous displays of callous arrogance in the history of cable news. Chris Hayes asked Grayson if there was anything in the interview with Secretary Kerry “that you find compelling or convincing?”

Hayes, to his credit, pushed back, although with characteristic understatement. “I have to say, that sounds morally obtuse to me.”

“Sorry,” Grayson replied, and with a cackle, added “I’m being totally honest.”

He then went on to argue that the calls he’s getting from constituents are running “100 to 1” against the intervention.

Whatever you think about Grayson’s logic, which I will get to in a second, what the frack is he laughing about? What, exactly, is so funny about this? There doesn’t seem to be much that people agree about with regard to Syria, but can’t we at least find common ground in the notion that this is not a laughing matter?

As for Grayson’s reading of the American public, he seems to be forgetting that the American people overwhelmingly supported military action in Iraq. Now, Grayson might point out that this was a result of misleading information, and he’d be right. However, aside from the fact that a significant chunk of the American public probably thinks Damascus is some kind of Halloween super-store, a certain amount of the erosion of public support for airstrikes could have something to do with people in the media telling them that this is just like Iraq.